JADC2: How the Army Is Bringing Next-Level Communication Systems to Life 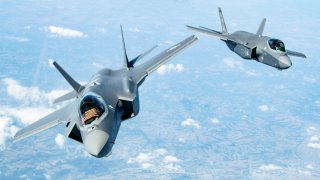 What if an enemy mechanized column was approaching friendly forces through mountainous terrain when a forward operating mini-drone detected the fast-approaching force from the air? Consider the possibility that the mini-drone instantly networked real-time video to helicopters and medium-altitude drones engineered with AI-enabled software to process incoming sensor data, organize information, and use data links to transmit time-sensitive data to ground vehicles. Meanwhile, nearby F-35 fighters receive the same target information, enabling a coordinated multi-domain attack upon the enemy positions. Even more, what if this tactical scenario unfolded along a coastal area, and datalinks could network threat information to Navy surface ships in support of the friendly ground force?

These kinds of scenarios are fast becoming a reality as the Pentagon moves quickly to bring its Joint All Domain Command and Control (JADC2) program to life. Yet, bringing this to tactical and operational fruition is not without technical challenges. What if the incoming video was sent through a unique datalink that was not compatible with incoming GPS signals, sensors, helicopter command and control, or even vehicle computer systems? Such a technological infrastructure would impede or even fully preclude the connectivity necessary to make the aforementioned scenario possible.

Solving this problem is the essential conceptual premise of JADC2. Rapid progress is being made through industry innovations and Pentagon initiatives to create standardized interoperable protocols and interfaces to enable connectivity. This approach, referred to as Modular Open Systems Architecture, or MOSA, is manifested through specific efforts to engineer a technical infrastructure built upon common standards. The objective is to enable both line-of-sight and beyond-line-of-sight connectivity. Deputy Secretary of Defense Kathleen Hicks has now signed a breakthrough Joint All Domain Command and Control Implementation Plan, a text that specifies a series of steps necessary to bring next-level multi-domain warfare and connectivity to life.

There are now several promising and already demonstrated “gateway” technologies in existence. They aim to essentially translate one protocol or technical configuration into a common language or transmission architecture, thus enabling interoperability.

For example, the Army has already demonstrated the Gateway Mission Router 1000, designed and manufactured by the Vertex Company. “The GMR-1000 provides that connection point into the tactical edge Army network via an integrated technical network to provide the connectivity needed for both soldier-worn and soldier-carried devices … So, it provides secure WiFi on platforms,” Pat Renwick, senior director at the Vertex Company, told the National Interest in an interview. “This provides a platform integration and distribution point as the Army's integrated tactical network to the individual soldiers and operators that are on that platform, whether it be a helicopter, ground vehicle, or any other type of platform.”

The Vertex system was demonstrated last year at the Army’s breakthrough Project Convergence 2021 learning exercise. AI-enabled computers received incoming sensor data from a variety of multi-domain input sources and performed the necessary analytics to instantly pair “sensors to shooters.” This shortening of the kill web, as it's called, reduces targeting and attack timelines from twenty minutes to twenty seconds. GMR-1000 is built to facilitate and enable this process.