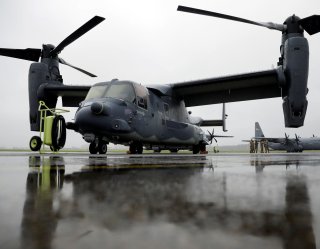 The V-22, which originally entered service with the United States Marine Corps in the mid-2000s, is a tilt-rotor aircraft capable of level flight like an airplane, and vertical take-off like a helicopter. This combination of efficient horizontal flight characteristics and landing and take-off flexibility gives the V-22 greater range and speed than helicopters. It also reduces logistical costs.

In service with the Marine Corps, the V-22 serves primarily as an assault transport platform and can ferry Marines from ship to shore quicker and farther than a helicopter could. In service with the Navy, the V-22 serves primarily as a transport platform between ships at sea and from sea to shore, where its relatively high cargo capacity and good range are particularly useful.

Japan’s V-22 “has a unique configuration with a customer-specific communication system. The marinized design resists corrosion and reduces the cost of long-term maintenance.” Japanese service members trained with Marines in the month leading up to their first V-22 delivery to gain proficiency with the platform.

The V-22 significantly augments Japan’s maritime patrol capabilities. In particular, Japan will likely use the V-22 for patrolling near the Ryukyu and Senkaku Islands. The Senkaku Islands, in particular, are a point of interest for the JSDF—and for China and Taiwan. Though uninhabited, the Senkaku Islands became disputed after the discovery of oil reserves in the island’s vicinity in the 1970s.

Boeing’s press release backs up the Osprey’s utility as a maritime patrol platform. “These aircraft [V-22s] support multiple missions, including the transportation of personnel, supplies, and equipment; humanitarian support and search and rescue missions; long-range personnel recovery.” The Japanese Self-Defense Forces stand to benefit from their close integration with the United States military, who is by far their most significant defense partner.

Despite the V-22’s not insignificant capabilities, the tilt-rotor has been involved in several incidents that have raised safety concerns. Many of the incidents involved hard landings, onboard fires, or stalls, some of which resulted in fatal crashes.

Still, Boeing maintains that the V-22 is not only air-worthy, but reliable saying that “with more than 500,000 flight hours, the V-22 is one of the most in-demand platforms in military aviation, providing safe, survivable, combat-proven mission success only capable with the tilt-rotor range, speed and versatility of the Osprey.”