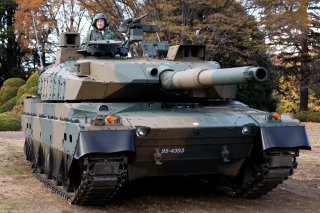 Fumio Kishida, the newly elected prime minister of Japan, has reiterated his commitment to defending the country against threats posed by China and North Korea, indicating that “all options” would be on the table for Japan’s security.

The prime minister made the remarks at his first troop review, which took place on Saturday afternoon at the Japan Self-Defense Forces (JSDF) Camp Asaka base north of Tokyo. He noted that the “reality is severer than ever,” describing Chinese encroachment in the East China Sea and North Korean ballistic missile tests.

“I will consider all options,” the prime minister stated, “including possessing so-called enemy base strike capability.”

Enemy base strike capability—the capability of striking another country’s bases, typically achieved with missiles—is a controversial doctrine within Japan. Article 9 of the country’s 1948 constitution outlaws it from participating in an offensive war, although what constitutes an “offensive war” is difficult to explicitly define. While its army, the Japan Self Defense Forces, is organized on the assumption that Japan might need to defend itself from external aggression, some anti-war activists have argued that missiles are an explicitly offensive weapon that the country should not be developing. In the past, this argument has led Japanese defense planners to de-emphasize purely offensive weapons in favor of more ambiguous ones.

Kishida, previously regarded as a “dove” within Japan’s political system, has overseen expansions to Japan’s military in the wake of crises in eastern Asia. On Friday, the country’s new cabinet approved a $7 billion increase to the country’s defense budget, covering items including missiles and anti-submarine countermeasures. That request, which would need to be approved by the Diet, Japan’s parliament, would bring the country’s total defense spending up to more than $50 billion, or around one percent of the country’s GDP.

Kishida has attempted to explain the increases in Japan’s defense budget on the rationale of the region’s worsening security environment. However, Japanese objections to increased military spending have remained strong; opponents of the new budget have claimed that the increases come as the country’s population is increasingly aging, leading to concerns that military funds should instead be spent on social services.