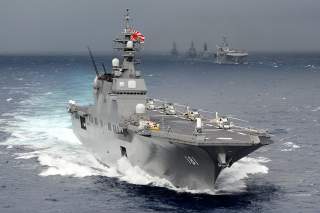 Some Japanese have a question about their nation’s new aircraft carriers.

What do we do with them?

But having carriers, and having a defined mission for carriers, is not the same thing. “Along with raising questions over whether the Izumo’s upgrade will remain within the confines of the country’s long-standing ‘exclusively defense-oriented policy,’ there seems to be a lack of consensus about the exact role that’s being plotted for the upgraded ships, aside from countering China,” according to the Japan Times.

Some Japanese defense officials privately told the newspaper what is already an open secret: that Japan wants carriers because of China’s growing military power. “We won’t publicly name any country, but the fact is that the Chinese navy has frequently made incursions into the Pacific Ocean by passing through the Miyako Strait,” the official said. “They’ve become increasingly active (in the Pacific) over the past five years.”

Some Japanese politicians and former military commanders fear that carriers would tempt Japan to pursue aggressive policies. “If the Izumo carries fighter planes, it would allow Japan to be able to stage an overwhelming attack from anywhere on the sea, wouldn’t it?” asked a Communist Party legislator.

Yet how “overwhelming” can be an attack by two small carriers, carrying twenty or so fighters, is debatable. “Senior Defense Ministry officials and former MSDF (Maritime Self Defense Force) officers are confused about the plan’s operational objectives,” the Japan Times said. “A key question is whether upgraded Izumo-class vessels can actually be deployed for practical combat operations, or if the objective is to mainly showcase the country’s military presence. That is because typically, an effective aircraft carrier fleet requires a rotation of more than three such vessels.”

“Usually you would need at least three vessels; one for actual deployment, one for training and one docked for maintenance,” a senior defense ministry official said told the newspaper.

The U.S. Navy generated a firestorm in February when word leaked that the Navy was considering retiring the carrier Harry S. Truman, which would reduce America’s active carrier force from eleven to ten. But even at eleven carriers, or the twelve that Pentagon planners believe are necessary, the U.S. Navy would still be perpetually juggling to keep enough carriers on station worldwide while ensuring adequate time for maintenance and crew rest.

Retired MSDF vice admiral Toshiyuki Ito estimated Japan would need four aircraft carriers. “If you only have two vessels, you can only use them for training personnel for taking off and landing operations,” Ito told the Japan Times. “So this plan doesn’t make sense for MSDF officers, frankly speaking.”

Another issue with the Izumo-class carriers is they can only carry about ten F-35Bs. That might be sufficient for peacekeeping operations—if dispatching carriers overseas was politically acceptable to the Japanese public—or convoy protection. But that’s not a lot of aircraft to protect Japanese naval task forces, or defend disputed islands, from China’s growing navy and air force.