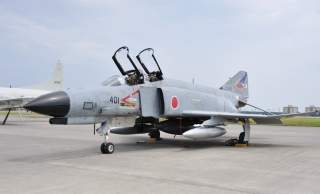 Yet another country is saying goodbye to its beloved F-4 Phantom.

Japan is preparing to phase out its nearly half-century-old, Japanese-built F-4EJs. They will be replaced by the F-35A, the land-based version of the Lightning II stealth fighter.

The Japan Air Self-Defense Force (JASDF) has three squadrons of F-4EJs, which will be retired in 2019 and 2020. A recent Japanese air show showed the remarkable feelings that the Phantom still arouses.

“To mark the retirement of the Phantom with the JASDF’s 302 Squadron, an air show was held at the JASDF base at Hyakuri, Ibaraki prefecture, north of Japan’s capital Tokyo on Dec. 2. Two of the unit’s jets painted in commemorative markings took center stage,” Mike Yeo wrote. “Hyakuri is home to all three of Japan’s Phantom squadrons.”

“In addition to the large crowd of locals who attended, the Hyakuri Air Festival also drew aviation enthusiasts from around the world, with groups from Australia, the Netherlands and the United Kingdom among the various nationalities present at the show.”

The 138 Japanese F-4EJs, manufactured by Mitsubishi Heavy Industries, were similar to the F-4Es that were flown for decades by the U.S. Air Force, except they lacked the AN/AJB-7 bombing computer or air-to-air refueling due to Japanese political constraints about employing force outside Japan. “An upgrade program in the 1980s saw the reintroduction of ground-attack capabilities in the form of anti-ship missiles, bombs and rockets,” Yeo explains. “An improved, lightweight radar was also fitted along with an improved avionics suite. Less than 100 Phantoms were upgraded, and were known as F-4EJ Kai (Improved) in JASDF service.”

Japan also flies the F-15J, a local variant of the American F-15 Eagle, and the F-2, which is based on the F-16. These are fourth-generation fighters of the 1970s, a step ahead of the third-generation Phantom, which first flew in 1958.

But switching from the F-4 to the F-35 will be a much bigger change. The F-35 is a fifth-generation fighter, a product of the twenty-first century. In addition to the land-based F-35A, Japan recently announced it would be acquiring the F-35B, the short take-off and vertical landing (STOVL) that can be launched off Japan’s Izumo-class helicopter destroyers. Japan has already received the first of its F-35As, and has trained some of the pilots. Tokyo is reportedly considering whether to buy another 100 F-35s to replace its F-15Js.

The most obvious difference between the F-4 and F-35 is that the latter is a stealth aircraft designed to minimize detection by radar. While the Phantom earned many compliments for its versatility and toughness, no one would ever call it stealthy. The F-4 also had two engines and two crewmen, a pilot and a radar/weapons officer. The F-35 is single-engined, which gives it less redundancy. And it’s a single-seater, which means one less pair of eyes to scan the skies for threats, though the F-35’s vastly superior sensors should make up for that.