Japan Is Following America's Lead In Getting Its Own Space Force 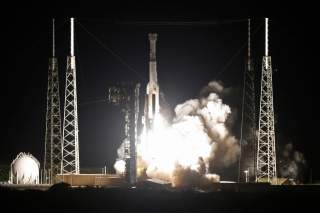 Key point: Multiple nations are considering getting their own Space Force.

Japan is creating its own military space force.

The new unit will apparently mirror many of the functions of the U.S. Space Force, a controversial new sixth branch of the U.S. military.

Japan’s Space Domain Mission Unit will not be an independent branch of the Japan Self-Defense Forces. But like the U.S. Space Force, which is linked to the U.S. Air Force in the same way that the U.S. Marine Corps is part of the Navy, Japan’s space unit will be part of the Japanese air force.

“He said Japan must also defend itself from threats in cyberspace and from electromagnetic interference against Japanese satellites,” according to the Associated Press. “Concerns are growing that China and Russia are seeking ways to interfere, disable or destroy satellites.”

“We will drastically bolster capability and system in order to secure superiority” in those areas, Abe said.

Japan’s space unit will be much smaller than U.S. Space Force, which has 16,000 personnel. “The space unit will be added to an existing air base at Fuchu in the western suburbs of Tokyo, where about 20 people will be staffed ahead of a full launch in 2022,” the Associated Press said. “The role of the space unit is to conduct satellite-based navigation and communications for other troops in the field, rather than being on the ground.”

In December, Abe’s government submitted to parliament a 50.6 billion yen (US$459.2 million) budget for space-related projects.

Abe did emphasize that Japan’s space force would cooperate closely with its U.S. counterpart. Critics of the U.S. organization have questioned whether a separate branch is really needed for military space activities, which have tended to be under the aegis of the U.S. Air Force.

What’s significant here is yet another sign of the growing militarization of space. There are no indications that Japan’s space unit will have any offensive capabilities such as jamming satellite links or even targeting them with ground-launched rockets or lasers, such as Russia, China and the U.S. have worked on since the days of the Cold War. In January 2019, for example, Russia tested an anti-satellite rocket.

Europe has also explored the idea of a European Space Force, as part of an effort – urged by French president Emmanuel Macron – to create a pan-European military. Though the proposal appears to have fallen flat, France is setting up its own national space force as a part of the French air force.

Just how peculiar is a space-focused branch of the military was recently demonstrated when the U.S. Space Force unveiled its new uniform. The Space Force uniform turned out to be an old U.S. Army camouflage pattern, leading to much derision as critics wondered how green-and-brown forest camouflage related to outer space (the same applied to the U.S. Navy’s now-discarded “blueberry” nautical camouflage uniform).

There is no word on what Japan’s new space force uniform will be.