Japan Is Getting Nervous About Russia and China's Military Ties 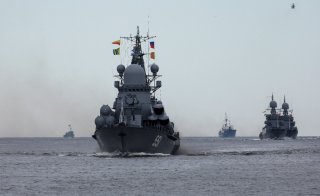 China is expanding its military cooperation with Russia by joining a multinational exercise called Vostok 2022. China is sending 2,000 soldiers, 300 vehicles, twenty-one fixed-wing aircraft and helicopters, and three warships to the Russian-led exercise.

“The participation of the equipment displayed the depth of China-Russia military cooperation, as the drills will deter uncertainties and contribute to peace and stability in the region,” the Global Times, a Chinese state newspaper, reported.

Growing Russo-Sino military cooperation and training is of particular concern to Japan, given its proximity to Russia and China. The Defense of Japan 2022 strategy document noted increased Russo-Sino collaboration and highlighted what it described as Chinese “coercion” and efforts to “change the status quo” in the East and South China seas.

“The country’s ties with Russia, an aggressor nation, have deepened in recent years, with joint navigations and flights being conducted in the areas surrounding Japan by both Chinese and Russian vessels and aircraft,” the text of the Defense of Japan 2022 document said.

Certainly increased training and cooperation between Russia and China may be taking on new urgency given Russia’s invasion of Ukraine. Perhaps of greater concern to Japan, however, is that Russo-Sino cooperation has been quite active in the Russian Far East.

“In the vicinity of Japan, Russia has made moves to strengthen cooperation with China, such as through joint bomber flights and joint warship sails involving the Russian and Chinese militaries, as well as moves to portray such military cooperation as ‘strategic coordination.’ These trends warrant concern and must continue to be closely watched in the future,” the Japanese strategy document noted.

Defense of Japan 2022 provides many of the conceptual premises upon which Tokyo is basing its current military modernization campaign. It is a comprehensive effort to upgrade and strengthen Japan’s Self Defense Forces, including a multi-billion dollar F-35 stealth fighter purchase and continued collaboration with the United States on key weapons programs such as the ship-based Aegis Combat System and SM-3 IIA missile interceptor.