Japan Is Modernizing Its Military, but Can It Do More? 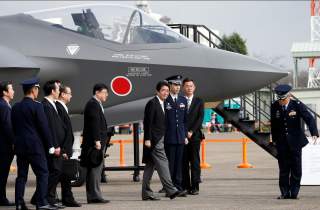 Key point: Japan already has a decent military and is working on new capabilities. However, it is unclear if these steps are sufficient to secure its future.

Japan is accelerating its military normalization process by building up its offensive capabilities, especially those of its Japanese Air Self-Defense Force (JASDF). As a part of that push, the United States on Oct. 29 granted Japan's request for a major upgrade to its F-15J fighter aircraft. Installing advanced radar and cruise missile capability on 98 JASDF jets will mark a crucial step in Japan's move away from its post-World War II pacifist stance. And while the upgrades will enhance Tokyo's options, maintaining Japanese national defense as the country's aerospace industry declines and the regional threat environment — including an expanding Chinese military — becomes more complex will become increasingly difficult.

From Defense to Offense

Since its founding in 1954, the JASDF has focused on developing potent air defense and anti-ship capabilities. This largely meshed with Japan's postwar self-image as a pacifist country with an air force geared exclusively toward defending the home islands. While the JASDF built a considerable ability to intercept inbound enemy jets and warships, it couldn't mount offensive operations beyond the immediate waters around Japan. Instead, Tokyo relied on its security alliance with the United States to serve as its offensive capability: If need be, the Japanese military could be the shield, and the U.S. military could be the sword.

Though Japan's pacifist strategic posture outlived the Cold War, it has steadily eroded in the 21st century as Washington urged it to beef up its military and because of Tokyo's concern that the U.S. commitment to Japanese national defense could waver. Japan's increasing alarm at a nuclear North Korea and a rising China have only reinforced the trend, spurring Japan to accelerate efforts to normalize its military.

One of the first significant steps for the JASDF in this regard was acquiring aerial refueling aircraft in 2008. Japan had previously never developed this capability given its potential to extend the range of its combat aircraft such that they could reliably strike other countries. Japan sought to justify the purchase by arguing it allowed the JASDF to reduce fuel costs, extend the duration of its air defense patrols and enhance its response time.

Another significant step in Japan's military's normalization occurred with the 2016 announcement that it was developing a new anti-ship cruise missile with the built-in capability of striking land targets. Such weapons, including versions that can be launched from the air, significantly enhance the JASDF's ability to strike at Tokyo's potential adversaries — including North Korea and China — on their own territory.

The JASDF's decision to majorly upgrade its F-15J fighter jets furthers Japan's transition to offensive military capabilities. The modernization of the aging, but still powerful, fighters will see them equipped with potent cruise missiles.

In conjunction with the new F-35 jets Tokyo has purchased, the upgrade will enhance Tokyo's ability to go on the offensive, including the ability to preemptively strike its adversaries, rather than just to defend itself — and the ability to inflict pain, of course, carries a deterrent effect. But even as Japan is bolstering its military, the already-substantial threats it faces are also growing.

An Expanding Array of Threats

During the Cold War and in close alignment with the United States, Japan focused on the Soviet Union as the only significant threat to the home islands. Today, Japan's threat environment is significantly more complicated. In addition to intercepting the Russian aircraft that still regularly approach Japan, the JASDF must contend with the much more active Chinese air forces — the People's Liberation Army Air Force (PLAAF) and the People's Liberation Army Naval Air Force (PLANAF). Moreover, North Korea has emerged as a major missile and nuclear threat over the last decade, forcing Japan to devote considerable resources to developing missile defenses and driving the JASDF toward obtaining offensive capabilities.

The PLAAF's and PLANAF's qualitative leaps in equipment seriously concern the JASDF. While the Chinese air forces have always outnumbered the JASDF, the latter typically boasted significantly better jets and pilots. But this is no longer a given since China has begun fielding large numbers of advanced jets and has greatly bolstered pilot training. Japan's approximately 300 fighter jets backed up by approximately 20 early warning and control aircraft, are well outnumbered by the Chinese air forces' 1,000 modern fighter jets and about 30 early warning and control aircraft.

Japan has sought to build its capabilities against these threats as quickly as possible by purchasing 147 of the already-in-production F-35s and by upgrading its F-15Js. But these decisions, especially the F-35 purchase, have caused some controversy in Japan.

Heavy reliance on purchases from the United States has disappointed the Japanese defense aerospace industry, which has largely been stuck with a marginal assembly role. Japan's purchases of foreign-built aircraft have left many domestic parts suppliers under increasing stress. In a 2016 ministerial survey, 52 of 72 aerospace companies said they are aware of supply disruptions and parts makers going out of business. Maintaining a mature domestic aerospace industry capable of meeting Japanese security needs against future challenges will be harder for Japan, given that its sector has been starved of major contracts as Tokyo has largely looked to the United States for big purchases.

Japan Modernizes Its Air Force, but Will It Be Enough? is republished with the permission of Stratfor Worldview, a geopolitical intelligence and advisory firm.