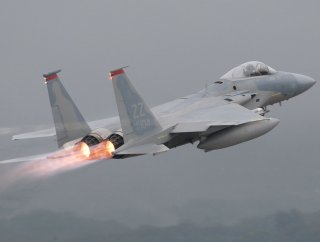 The sale agreement is a part of a $4.5 billion modernization initiative that aims to enable Japan’s F-15s to keep pace with newer threats.

Under the Boeing-MHI agreement, Boeing will supply MHI with “retrofit drawings, ground support equipment and technical publications for the upgrade of the first two F-15J aircraft to the Japan Super Interceptor configuration,” with most of the upgrades electronic in nature. The upgrades will include “state-of-the-art electronic warfare and weapons,” and an “all-new advanced cockpit system, running on the world’s most advanced mission computer, will deliver pilots enhanced situational awareness.”

About half of Japan’s F-15 fleet, around ninety-eight airframes, are expected to be upgraded to the F-15JSI standard, which is designed to help them work in tandem with Japan’s current F-35s. The remaining half of the older Japanese F-15’s will eventually be retired for brand-new F-35s.

The American aerospace firm McDonnell Douglas built the first F-15 in the early 1970, nearly fifty years ago. The air superiority fighter continues to enjoy success on the international market, and is in service with Israel, Saudi Arabia, Japan, Singapore, as well as the United States. The airframes continue to be upgraded even today.

Japan currently operates over two hundred F-15J (single seat) and F-15DJ (two seat) airframes. These airplanes, based on the American F-15C, were manufactured under license by Mitsubishi Heavy Industries. They are getting a bit long in the tooth however—the first of the Japanese-standard F-15J was delivered nearly forty years ago, in 1981.

Interestingly, an artist’s impression released along with the Boeing announcement showed an F-15 in Japanese livery equipped with a large missile mated to the airframe’s center weapon pylon. The missile appears to be an AMG-158 Joint Air-to-Surface Standoff Missile, also known as the JASSM.

The large, 2,000-pound JASSM is a long-range standoff missile with a conventional warhead. It is “designed to destroy high-value, well-defended, fixed and relocatable targets,” and benefits from jam-resistant GPS as well as an infrared seeker. But above all, the JASSM’s stealthy design makes it hard to detect and difficult to destroy. Thanks to its long standoff range, the missile would keep pilots and airframes farther away from enemy fighters—an important aspect that should breathe new life into Japan’s forty-year-old interceptors.

In particular, the standoff missile would help Japan respond to maritime threats, particularly from China. Japan has recently had to scramble jets in response to Chinese and Russian airspace violations—947 last year alone, which is over two per day. The violations typically center around the disputed Senkaku Islands in the South China Sea, which both China and Japan lay claim to. Along with Japan’s recent acquisition of V-22 Osprey tilt rotors, this most recent upgrade supports Japan’s more muscular foreign policy in recent years.

Boeing’s announcement ended on a positive note, saying that the F-15 upgrades “will deliver critical capability for national and collective self-defense, in which the F-15J plays a key role. At the same time, they will provide MHI and our partners in Japan’s aerospace defense industry with an opportunity to enhance their own extensive engineering capabilities.”