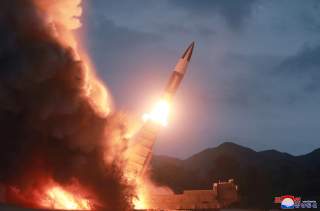 When the next Summer Olympics are held in July 2020 in Tokyo, expect to see more than the world’s greatest athletes.

There will also be missiles standing guard.

“To ensure the security of Tokyo, where the Summer Games will open on July 24, the ministry wants to equip the 1st Air Defense Missile Group with PAC-3 MSE interceptors to defend against possible threats such as ballistic missiles, drones and unidentified aircraft,” according to Kyodo News.

“The deployment of the improved ground-based batteries by units responsible for defending the capital's airspace is planned between April and July, earlier than in other parts of Japan.”

The Japan Self Defense Forces currently operate older PAC-3 batteries at bases in Chiba, Kanagawa, Ibaraki and Saitama prefectures. The Olympics would receive the improved PAC-3 MSE models. “The current PAC-3 batteries deployed nationwide have a range of several dozen kilometers and the upgraded version of the interceptors is expected to enhance detection capabilities and double the range,” Kyodo News said.

“Response capabilities to a cruise missile flying at a low altitude will improve," said a senior member of the Japan Air Self-Defense Force.

This isn’t the first time that missiles have guarded the Olympics. The Summer 2012 games in London saw Rapier and Star Streak short-range anti-aircraft missile batteries deployed around the event. Indeed, Star Streak missiles were deployed on apartment house rooftops.

But the deployment of the PAC-3 MSE, the most advanced version of Lockheed Martin’s Patriot system, is a bit more puzzling. The Patriot is a mobile, long-range anti-aircraft and anti-missile interceptor. These are not small weapons: a Patriot missile is almost 20 feet long. They are designed for intercepting aircraft as well as ballistic and cruise missiles.

However, during the September 2019 attack on Saudi Arabian oil facilities by drones and cruise missiles launched by Iran and its Houthi allies, Saudi Arabia’s six battalions of Patriot missiles failed to detect or intercept the attackers. This has led to questions about the effectiveness of the PAC-3 against small or low-flying objects.

But the bigger question is this: who exactly would fire cruise missiles at the Tokyo Olympics? Terrorists would most likely plant bombs or unleash suicide bombers, or they would use rifles as did the Palestinian terrorists at the 1972 Munich games. It’s possible that a group like Al Qaeda or ISIS would launch or hijack a suicide aircraft as in 9/11, but presumably Japanese air force fighters would be on alert against such an eventuality.

However, North Korea -- Japan’s volatile neighbor across the water – does have ballistic and cruise missiles (as does Russia, but Moscow isn’t in a hurry to trigger World War III). Japan is already buying two Aegis Ashore missile defense systems, though locating the sites in a tsunami zone has raised questions about the $2 billion project. Japan also aims to “upgrade all the current PAC-3s by fiscal 2022 and has requested the required funding in the budget for the next fiscal year starting April,” according to Kyodo News.

Aegis Ashore and Patriot make sense for Japan, given that North Korea has nuclear weapons as well as land-based and submarine-based missiles to loft them. North Korea also has a habit of firing those missiles into the water off Japan whenever it’s annoyed at the world. But firing missiles at the Tokyo Olympics would trigger a war with Japan, and almost certainly the U.S. and South Korea.