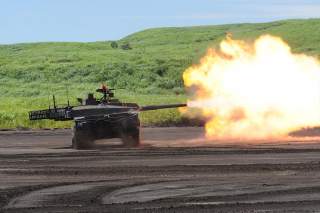 In a nation whose population is so elderly that robot children substitute for the real thing, it’s not surprising to find a lack of young people to join the military.

But Japan is finding that robots are no substitute for people to maintain its military.

The Japan Self-Defense Force has been unable to meet its recruiting goals since 2014. As of March 2018, it was almost 10 percent below its budgeted strength of 247,154 personnel. Enlisted personnel, who tend to be younger, were 26 percent below their budgeted level.

“Empty recruiting tables and disinterested audiences are becoming more common for the JSDF as the country’s demographic troubles and robust economy have created what some defense insiders call a ‘silent crisis’ for military recruiting,” according to the Japan Times. “Amid a rock-bottom birthrate, the number of Japanese age 18 to 26 — the core of the recruitment pool — has shrunk to 11 million from 17 million in 1994. That group is forecast to shrink to 7.8 million over the next 30 years.”

Hideshi Tokuchi, a former vice-minister of defense, warns that lack of manpower will have consequences. “The manpower shortage will affect operational efficiency. It is a headache. There is more to do with fewer people and I don’t think there is any easy solution.”

Conscription is barred by Japan's constitution, so the military is trying to compensate by raising the maximum age for new recruits as well as recruiting more women. Females only make up about 6 percent of the JSDF, compared to 15 percent in the United States and 10 percent in Britain.

Japan's problems are hardly unique. Birth rates are falling in Russia (down 10.7 percent last year) and in Europe, while even the U.S. birth rate has fallen to a thirty-year low. In many nations, the allure of a lucrative civilian career outshines the splendor of a military uniform.

However, Japan does labor under the burden of the past. Military service has not been popular in post-World War II Japan, still haunted by the specters of fascism and atomic bombs. The Japanese constitution, shaped by the American occupation, outlaws war, while the Imperial military became a “Self-Defense Force.”

Japan's personnel crisis raises an interesting question: how many soldiers does a nation need to recruit to maintain its military power? Before World Wars I and II, France was acutely aware that Germany had a larger population to maintain a larger army. Thus the Maginot Line, which has gone down in history as folly, though it actually was a rational attempt to use concrete and steel to compensate for a lack of flesh.

To some extent, Japan is shielded from the worst of military demographics. It is not likely to fight a land war in Asia, or commit its troops to massive overseas campaigns like the United States in Iraq. Any conflict with China would likely be a naval-air struggle involving ships and airplanes, with perhaps a couple of brigades of marines to seize or defend island bases. This sort of warfare requires limited numbers of skilled personnel to operate and maintain aircraft and ships.

And, perhaps a nation so enamored of robots will develop combat automatons to do the dirty work. But unless the nature of warfare really changes, Japan will still need enough young people to keep its military machine going.