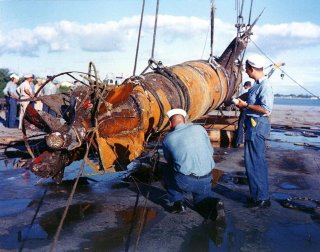 It takes a special breed of men, and now increasingly women, to serve on naval submarines. Few can truly appreciate the cramped conditions, stale air, and lack of natural light but the situation was likely far worse during World War II. The subs were far more primitive and offered little in the way of creature comforts.

Then there was the fact that some of the submarines were little more than metal coffins.

While Japanese shipbuilders proved to be forward-thinking and built many capable aircraft carriers, as well as what is arguably the most powerful battleship ever built, the Imperial Japanese Navy (IJN) earned a dubious reputation for producing some of the worst submarines of the war.

The IJN had actually been an early pioneer in submarine warfare, having purchased five Holland-type submarines from the United States in 1904. The island nation progressively built up its strength and expertise and, by the outbreak of World War II, had one of the largest sub fleets in the world.

However, numbers are just one determining factor when it comes to strength and capabilities. The Japanese may have had a large force, but they simply failed to adequately employ those submarines effectively. Instead of being used independently, the IJN employed its submarines as part of a larger task force to be used against warships.

Then there is the fact that many of the submarines were based on antiquated designs, while others were death traps in the truest sense.

The Worst Submarine Ever: Type A Kō-hyōteki-class

While taking part in a raid with these submarines was also considered a risky mission, the IJN accepted that the two-man crew likely wouldn’t return home. That may have seemed a fair tradeoff if the boat and crew could do significant damage to the enemy, but because of the poor design and capabilities there was little chance of success.

In concept, the Type A boats—which were 78.6 feet long and displaced 46 tons—could sprint up to twenty-six miles per hour submerged, yet could not dive deeper than 100 meters. More importantly, the Type As, which were armed with two muzzle-loaded torpedoes, had no engine and ran purely on batteries. The subs also had an endurance of just twelve hours at speeds of six miles per hour and typically ran out of power much faster. The small boats were also difficult to control, especially in anything but calm seas.

For those reasons, a larger submarine “mothership” was required to transport the Type A close to the target area, putting the larger sub at risk. Even then, the battery limitations made it unlikely the midget sub could make it back to safety, so each one was equipped with a 300-pound scuttling charge as a self-destruct device. The theory was that the crew could do more damage to the enemy after “successfully” completing its mission.

At Pearl Harbor on December 7, 1941, five of the midget submarines were employed, and while at least one may have played a role in the sinking of the USS West Virginia and even the capsizing of USS Oklahoma, the vast majority of the destruction of the U.S. fleet came from the aircraft.

In subsequent raids including an attack on Sydney Harbour, the midget submarines proved wholly ineffective. The chance of success was low, and there was little likelihood that the crew could escape. It may have been seen as honorable to die for the emperor, but it was a waste of resources, both in terms of men and material.

The Type A Kō-hyōteki ranks not only as the worst submarine of all time, but one of the worst military vehicles ever devised. The few that were employed simply sent brave men to their deaths.