Japan's Air Force Is Getting a Modern-Day Makeover: F-15s and F-35a 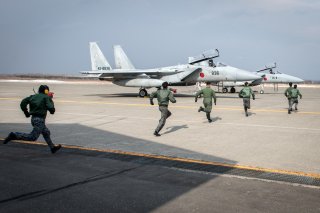 The contract “provides for the design and development of an integrated suite of aircraft systems to support modification of the Japan Air Self Defense Force F-15MJ aircraft and the development, test, and delivery of four Weapon System Trainers,” according to the Pentagon.

The work, which will be conducted in St. Louis, Missouri, is expected to be completed by the end of 2028. The contract also reportedly stipulates the delivery of four Weapons System trainers. Japan’s Air Self-Defense Force (JASDF) currently fields a fleet of around 155 Mitsubishi F-15J fighters, procured by the JASDF in the early 1980s as part of an effort to replace its older F-4 Phantom II variants. The F-15J fighters are largely identical to the F-15C/D revision of the Eagle, boasting only minor differences in radar equipment and several other avionics categories. Tokyo initially planned to upgrade as many as ninety-eight of its F-15J’s under the modernization program, but that estimate was later cut down to seventy as a cost-saving measure. It was previously reported, though never officially confirmed, that the new F-15 JSI—or Japan Super Interceptor—revision will support Lockheed Martin’s AGM-158 joint air-to-surface standoff missile (JASSM), giving the fighter a new level of performance against high-value, deeply entrenched targets. The JSI standard is expected to bring new electronic countermeasures (ECM) capabilities and an upgraded active electronically scanned array (AESA) radar.

Even as Japan works to modernize its older aircraft, Tokyo also is in the midst of a large-scale procurement of F-35 Lightning II fifth-stealth generation stealth fighters. Washington approved a further Japanese bid of $23 billion in July, bringing the total number of F-35’s Japan intends to buy to 157. This number includes forty-two F-35B short take-off/vertical landing (STOVL) variants, with the rest expected to be of the conventional F-35A variety. The F-35B can take off from short runways and chastened military bases, offering the JASDF a greater degree of operational flexibility and survivability in the context of a major conflict with a great-power adversary like China. U.S. F-35Bs were tested aboard the Japanese ship Izumo in October, marking the first time since World War II that a fixed-wing aircraft took off from a Japanese vessel. Japan’s first F-35A squadron was delivered to the Misawa Air Base in 2019. The JASDF is scheduled to take delivery of its first eight F-35B fighters in 2024.