The Jetpack Man Has Been Spotted Again in Los Angeles 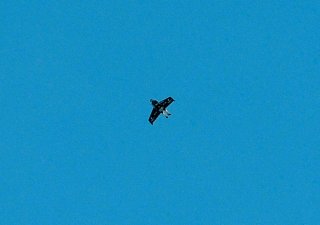 On a couple of occasions in 2020, what looked an awful lot like a man flying in a jetpack was spotted in the vicinity of Los Angeles International Airport. A JetBlue pilot spotted it in August, and a China Airlines pilot had another sighting in October.

The government has investigated into the matter, with the FBI and FAA looking into it, and while there is one company in the Los Angeles area that makes jetpacks, its owner has disavowed any connection to the “Jetpack Man,” stating that it hadn’t been flying on the dates of the sightings and that it wouldn’t have been possible for his jetpacks to take off without anyone noticing the noise.

The War Zone reported earlier this year that, based on Freedom of Information Act (FOIA) requests from a man named John Greenewald, that many in the government believe the “Jetpack Man” was actually a drone, probably meant to resemble a man with a jetpack.

“All told, the case of the ‘jet pack guy’ seems to be very much open from what we know now. It's still interesting to know that FAA officials investigating the matter have been exploring similar and, in some cases, identical avenues to try to solve this mystery,” the War Zone site concluded at the time. “While a drone dressed-up to look like a jet pack guy remains one theory, we still have no conclusive idea as to what or who the elusive Los Angeles rocketeer actually is.”

Now, the same site has reported on another Jetpack Man sighting.

The War Zone, citing ABC 7 in Los Angeles,  reported that pilots at LAX have once again spotted what looks like the Jetpack Man near the airport. These sightings took place nearly a year after the original sighting.

“A Boeing 747 pilot reported seeing an object that might have resembled a jet pack 15 miles east of LAX at 5,000 feet altitude,” an FAA spokesman told ABC 7. “Out of an abundance of caution, air traffic controllers alerted other pilots in the vicinity.”

ABC also posted audio of the FAA calls, which referred to the Jetpack Man as “the UFO” and “Iron Man.”

“One thing is becoming quite evident- something really is going on,” The War Zone wrote of the latest sighting. “It is getting very hard to discount these encounters as a fluke or some errant trick of the light. There is something around LAX that is capable of flight that looks like a dude in a jetpack.” He speculated that it could be a balloon, or possibly a drone, but “it is flying where it shouldn’t.”