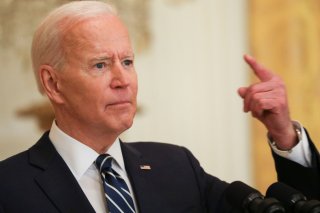 While touring a Michigan assembly plant and meeting with members of the International Brotherhood of Electrical Workers last March, then-candidate Joe Biden did not react kindly when pressed on whether he would take guns away from Americans.

“You’re full of shit,” he snapped at a construction worker who accused Biden of “actively trying to end our Second Amendment right.” Biden threatened to bash his questioner for insisting that, as a public servant, he ought to be transparent and answerable to the people. “I’m not working for you,” he said angrily. “Don’t be such a horse’s ass.”

That heated exchange is all but forgotten now, and Biden is taking a new tack, using tragedy instead of anger to silence critics.

Two shootings in Georgia and Colorado have reignited the debate over gun control. Neither neatly fits the Democratic Party’s preferred profile: a white male conservative with a racial motive. The Georgia suspect told police that he acted out of depraved sexual frustration. In Colorado, the suspect is a devout Muslim whose family emigrated from Syria. He was known to the FBI before the shooting and has a history of violent behavior, including a 2018 conviction for misdemeanor assault. Rather than conservative media, his Facebook posts consist of PBS and Washington Post articles.

But none of this matters. The lives of the victims and suspects and the human circumstances surrounding these tragedies have already become flattened stage props for political theater. There is no time to think, says Biden. “I don’t need to wait another minute, let alone an hour, to take common-sense steps that will save the lives in the future and to urge my colleagues in the House and Senate to act,” he announced Tuesday from the White House State Dining Room.

However, there is good reason to pause because Biden’s “common-sense” gun control steps would trample law-abiding, working-class Americans—like the Michigan construction worker—most of all.

Gun owners would have two choices: either surrender their property to the government or pay a $200 tax to keep each item, which will be added to a national registry. For many people, this would quickly turn into thousands of dollars paid to keep their own property. A hunter, for example, with just one AR-15 and four standard capacity magazines would owe the federal government $1,000. Failure to comply could mean up to ten years in federal prison and a $10,000 fine.

There are now more gun owners than ever. Even before record firearm sales in 2020, the National Shooting Sports Foundation estimated one out of every five firearms purchased in this country is an AR-style rifle and that Americans own fifteen million AR-15s. Two-thirds of Americans own more than one gun; millions are middle- and low-income—people whose taxes Biden said he wouldn’t raise. “The president remains committed to his pledge from the campaign that nobody making under $400,000 a year will have their taxes increased,” White House press secretary Jen Psaki said on March 15. And yet, his gun control plan amounts to a massive tax on the working class.

Biden’s policies would make it prohibitively expensive for everyday Americans to own firearms, effectively pricing them out of self-defense and hunting tools. Wealthy Americans—and criminals—would be far less affected by their implementation. Democrats don’t seem to have a problem with that, as Senator Dianne Feinstein (D-Calif.) is also calling for legislation to renew the Assault Weapons Ban.

“In 1994, I introduced a federal Assault Weapons Ban, which President Clinton signed into law,” Feinstein said before the Senate Judiciary Committee on the shooting in Boulder, Colorado. “A 2016 study showed that compared with the 10-year period before the ban was enacted, the number of gun massacres between 1994 and 2004 fell by 37 percent, and the number of people dying from gun massacres fell by 43 percent,” she went on. “Unfortunately, the ban expired in 2004, and in the 10 years after, there was a 183 percent increase in massacres and a 239 percent increase in massacre deaths.”

Like Biden, Feinstein points to dubious data about the efficacy of assault weapons bans. But most of the evidence suggests they don’t work.

“We cannot clearly credit the ban with any of the nation’s recent drop in gun violence,” a definitive Department of Justice-funded study of the 1994 law concluded in 2004. “Should it be renewed, the ban’s effects on gun violence are likely to be small at best and perhaps too small for reliable measurement.” Lois Beckett, a reporter covering gun violence and gun policy at left-leaning ProPublica, points to a study by Duke University policy experts that came to a similar conclusion. “There is no compelling evidence that it saved lives,” they wrote. Indeed, this seems to be one of the rare issues that can bring people from across the political spectrum together.

“Regardless of one’s opinion on guns and gun control, it is obvious that this proposal will disproportionately impact poor and working-class communities,” wrote Kim Kelly in the Washington Post about Biden’s assault weapons ban. Kelly is a left-wing labor organizer; she likens the “war on guns” to our failed wars on “poverty” and “terror” that merely served to swell the size and scope of the federal government. On cue and without a hint of irony, Senate Judiciary Chair Dick Durbin said Tuesday that the government could tackle gun violence the same way it successfully handled the opioid crisis.

History doesn’t repeat, but it does rhyme, to paraphrase Mark Twain. Just as in the 1990s, the narrative about assault weapons is a largely media-driven fabrication. According to Gary Kleck, the David J. Bordua Professor Emeritus of Criminology at Florida State University, assault weapons were only used in 1.4 percent of gun crimes before the implementation of national or state assault weapons bans in the 1990s. The same is essentially true now. As Democrats call for another ban, FBI data show you are more likely to be killed by a club, a foot, or a knife, than an AR-15-style rifle.

Even the New York Times recently admitted that only about one out of every 400 gun deaths is the result of a mass shooting—or any attack with at least four deaths, like gang violence. More than half of gun deaths are from suicides, as Margot Sanger-Katz of The Times has noted. Nevertheless, it is the media that manufactures a perception of mass shootings disconnected from reality.

It’s difficult to overstate the power of the media’s ability to manufacture consensus on issues like gun control. A recent study in the Journal of Interpersonal Violence found that the “perpetuation of potentially inaccurate stereotypes not only misguides future research on [mass shootings], but also shapes the social construction of mass murder.” In other words, statistically rare acts of violence are propagandized as systemic social problems. How rare? “Put another way, being the victim of a mass shooting is just about as unlikely as being struck by lightning, which occurred at a rate of 0.035 per 100,000 people in 2016,” explains Jaclyn Schildkraut, Associate Professor of Criminal Justice at the State University of New York at Oswego. You are far more likely to die in a car crash, in a fire, or choking on food, she notes.

Biden may make appeals to the hearts of Americans, cheapening two tragedies in the process, but there is nothing compassionate about the Democratic Party’s gun control agenda. The realities of these policies mean depriving millions of Americans of the tools they use for self-defense and hunting—or turning them into fugitives overnight because they cannot afford to pay the fees to keep their property with prison sentences comparable to rapists hanging over their heads. This is class warfare by another name, and that should make it clear Biden is still “not working for you” as he prepares to issue executive actions on gun control.