Joe Biden Is Being Tested on Nord Stream 2—Will He Fail? 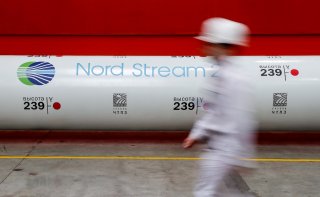 Lines are being drawn between Congress and the Biden administration over Nord Stream 2, the unfinished natural gas pipeline that would double gas exported from Russia directly to Germany.

Under black-letter laws passed by Congress in 2017, 2019, and 2020, the administration is to sanction entities it has determined are involved in the pipeline’s completion. Sanctionable range from vessels engaged in the pipeline’s construction to entities providing broader support such as insurance, certification, and installation services to the project.

After the sanctions legislation in 2019 was enacted, Switzerland’s Allseas, whose ships were laying the remaining section of the pipe in Danish waters, pulled out of the project and the construction halted. However, following November’s presidential election here, construction has begun once again. And, so far, the administration has not moved to sanction any additional companies or entities involved—despite, as Ranking Member of the House Foreign Affairs Committee Michael McCaul (R-TX) and committee member Adam Kinzinger (R-IL) pointed out in a recent hearing and letter, there being plenty of reliable information available to do so. As the members pointed out to Secretary of State Blinken, the Danish Maritime Authority has actually listed other Russian vessels working with a previously sanctioned ship on the pipeline.

The administration is saying that it has not acted as yet because it wants to dot all the “i’s” and cross all the “t’s” before actually moving to sanction someone. Fair enough. But it’s also the case that the pipeline is nearing completion and the Kremlin is testing whether then-candidate Biden’s criticism of the pipeline was just rhetoric now that he’s president. Not exactly a test on the order of a recently elected JFK and erection of the Berlin Wall in 1961, but a test nonetheless.

Complicating matters for the Biden White House and the State Department is the desire to renew transatlantic relations—with Germany seen as key to doing so since it’s the most powerful of the continent’s powers. But the current government under Chancellor Angela Merkel is determined to move forward with the project. Sanctions against companies now are undoubtedly seen by some in the administration as getting in the way of that larger agenda.

What’s missing from this calculation is that Berlin is also testing the new White House occupant. As we have already seen with Merkel’s race to complete the Comprehensive Investment Agreement between the EU and China before Biden took office, the chancellor is determined to prioritize German interests over a broader agenda in which it is asked to support a tougher transatlantic approach both to Moscow and Beijing.

There is also a tendency when thinking of Germany to assume that there is a universal consensus supporting Nord Stream 2. In fact, not everyone in Merkel’s party, the Christian Democrats, is even on board. The German Greens are opposed and even some within the typically Russian-leaning Free Democrats are now calling the project into question. Only the Social Democrats, whose former party leader and ex-chancellor Gerhard Schroeder is Nord Stream 2’s chairman of the board, seem to fully back the project.

Nor is there a consensus within Europe. On several occasions, the EU Parliament has voted in opposition to the pipeline’s completion. And the EU itself has not altered its formal energy strategy, which, among other things, has a goal of diversifying energy supplies rather than increasing dependence on a market-dominant supplier such as Gazprom.

Key allies in Europe understand the pipeline project is as much a strategic play by Moscow as a commercial deal. Once completed, whatever leverage that Ukraine has vis a vis Moscow as a transit path for Russian gas to Europe will dissolve. Already, with the completion of Nord Stream I, the percentage of gas flowing through Ukraine to Europe had dropped from some 80 percent to less than half that.

Although the pipeline is 95 percent complete, it will still need a certificate from an independent company that its materials and construction meet EU safety standards before it can go into operation. The administration should make clear that, under the law, the company doing the certification can and will be sanctioned as well. In addition, a German government regulator must certify that the pipeline operator is independent of the gas provider, Gazprom—which, in turn, must be assessed by the European Commission for compliance with EU energy directives. Time is short but it has not run out.

With the Christian Democrats being punished decisively in two recent German state elections, it is not clear that the route for rebuilding transatlantic ties goes through the retiring Chancellor Merkel in any case. The administration should use, rather than avoid, congressional demands it follow the law and impose sanctions to meet the twin tests being posed by Moscow and Berlin. Getting transatlantic ties back on track is important, but it should be the right track.

Gary J. Schmitt is a resident scholar in strategic studies at the American Enterprise Institute and a contributing editor at The American Interest.