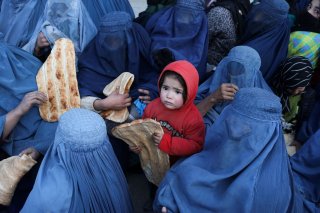 Few Americans have kept up-to-date on the catastrophic consequences that the U.S. withdrawal from Afghanistan and the subsequent Taliban takeover have caused for that country. Before the Taliban’s conquest, 80 percent of Afghanistan’s annual budget was provided by Western donors, with the lion’s share from the United States. Kabul’s foreign creditors have been far more reluctant to continue payments to its new rulers, and the international community has also refused to allow the Taliban access to the previous government’s funds abroad. Of the roughly $9 billion stored abroad by “Da Afghanistan Bank” (DAB), Afghanistan’s central bank, more than $7 billion is held in the United States. The United States has refused to turn it over to the Taliban for the last six months, declining to recognize the group as Afghanistan's legitimate government.

The Taliban’s historic record of hostility against the United States ensured that the decision to withhold the funds was not initially controversial. But the decision has rightfully come under scrutiny as the near-bankrupt country has slid toward a horrific humanitarian crisis. The Taliban-led government, tasked with maintaining the remnants of the prior administration’s bureaucracy with a pitiful fraction of its budget, has struggled to pay the salaries of ministers and public servants, including teachers. This has been a major obstacle to its promised reopening of all schools in March. The government has also been unable to pay for imports of food and electricity, leading to blackouts and hunger across the country. Today, nine out of every ten Afghans live below the poverty line. The United Nations – certainly no friend to the Taliban – warned that as many as one million Afghan children could starve in the coming year without emergency humanitarian relief. In January, the UN requested $5 billion for Afghanistan, the largest single funding appeal in its history, and warned that unless immediate action was taken, it could need $10 billion to prevent a greater catastrophe in 2023.

In spite of the tumult of the past year and the ongoing famine, the fundamentals of Afghanistan’s economy are sound. The country has a sufficient agricultural base to prevent widespread starvation if properly distributed, and enjoys a wealth of precious metals and minerals for future foreign investment. Afghanistan’s current problem is a liquidity crisis: Due to a combination of capital flight, international sanctions, and reluctance to engage with the morally dubious Taliban government, there is very little Western currency left in Kabul. To unfreeze the country’s economy, Western governments and international organizations need to pass out cash, renewing circulation and restoring economic confidence.

The sticking point in any aid program is the concern that it could aid the Taliban, which for better or worse is now firmly established as Afghanistan’s de facto government. This is the crux of the issue: If there are ways to provide this aid without allowing members of the Taliban to enrich themselves through corruption, the United States has a moral imperative to take them. But if Washington is unable to provide aid in ways that keep Taliban officials from lining their pockets, it could arguably be justified in continuing to withhold aid. Fortunately, options to aid Afghans independently of the Taliban exist. Humanitarian groups such as the Red Cross continue to operate in the country, and funds can be paid to them directly. The United States has also loosened its sanctions policies on Afghanistan in recent months, giving aid organizations limited authority to transfer money into the country for benign uses – paying the salaries of teachers, for instance. To help release aid, the U.S. government can establish a trust fund, requiring auditing of disbursements and reserving the right to change the fund’s policies if it becomes clear that the money ends up in Taliban hands.

The U.S. government understands these procedures. On Friday, President Joe Biden signed an executive order consolidating the $7 billion in DAB funds into a single account at the Federal Reserve Bank of New York. Of the money to be collected in that account, the President indicated that half – around $3.5 billion – would be moved to a regulated trust fund established to provide humanitarian aid.

There are still clear criticisms to be made of Biden’s use of these funds. As International Rescue Committee CEO and former UK Foreign Secretary David Miliband noted before the Senate, no amount of foreign aid can take the place of a functioning economy. Some observers have predicted that the money will be primarily targeted toward supplying basic aid, like grain and cooking oil, rather than currency to stimulate Afghanistan’s commercial sector. Because the trust fund is administered from Washington rather than Kabul, it is also likely that most of the funds will be spent on U.S.-based aid groups, meaning that a portion of the money will remain in the United States as overhead costs. Even so, the program is likely to quickly save lives and help to thaw the frozen Afghan economy.

However, the Biden administration’s decision to withhold the other half of DAB’s money – also $3.5 billion – for damage payments to the victims of the 9/11 attacks is of dubious legality, overtly immoral, and certain to negatively impact Washington’s broader goals in aiding an Afghan recovery.

The widespread description of Biden’s decision as a “theft” from Afghanistan is not entirely accurate. For the time being, the money remains in the Federal Reserve Bank’s account. Its final dispensation will be decided not by the Biden administration, but by a judge after further legal proceedings. It will likely remain tied in litigation for several more years, regardless of Biden’s further actions. Fortunately, the legal case for turning over the DAB account’s funds to 9/11 victims is far from established, and will likely come under further scrutiny during the upcoming legal process.

The basis for the assets’ seizure is a default judgment in a 2012 lawsuit, Havlish v. Osama bin Laden et. al., which awarded $7 billion to a group of roughly one hundred fifty family members of 9/11 victims from the assets of Osama bin Laden, al-Qaeda, and the Taliban. The Taliban and al-Qaeda do not operate bank accounts in the United States, so the judgment was essentially an empty promise – until September 2021, when Havlish et. al. convinced a judge to issue a writ of execution seizing the DAB funds, on the basis that the Taliban was now the government of Afghanistan and the funds were therefore within its rights to take.

The Biden administration’s decision on Friday was essentially an indication that the U.S. government would not object to any legal decision paying out half of the DAB funds to the families of 9/11 victims. But there is a logical inconsistency here: The United States has never recognized the Taliban government, and hence does not consider it to have any authority over DAB. How, then, can a U.S. court legally confiscate DAB’s money from the Taliban, if the U.S. government does not acknowledge (and does not allow) the Taliban’s control over DAB?

These fights are likely to continue in court for some time. Regardless of the outcome of the legal decision, however, there is a strong moral case against using DAB funds to compensate 9/11 victims – a moral case that has been expressed by several 9/11 victims themselves. Fundamentally, in spite of the presence of the DAB’s assets within the Federal Reserve Bank, the money does not rightfully belong to the United States, but to the people of Afghanistan, and taking it represents a form of theft.

This is a view represented by the DAB within Afghanistan, which is now led by a member of the Taliban, as well as by the Taliban’s designated UN representative. But it is also the view of countless non-Taliban Afghans and former President Hamid Karzai, who observed that Afghans themselves were victims of Al-Qaeda and the Taliban long before, and long after, the September 11 attacks.

The seizure could perhaps be justified if the funds had simply been provided to DAB by U.S. aid in the first place. Instead, though, they mostly entered the account through third-party foreign exchange. During the U.S.-led war in Afghanistan, whenever U.S. dollars were exchanged for afghanis, the dollars were deposited within DAB’s account. In turn, the Afghan government could use those dollars to purchase other commodities, as other central banks often do. Alex Zerden, a former Treasury Department official, characterized the reserves in the New York Times as a “rainy day fund for the Afghan people.”