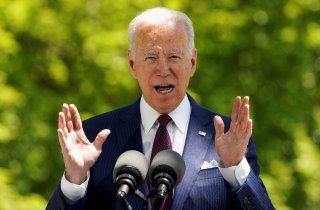 A fierce critic of Russia’s president, Vladimir Putin, Navalny held a weeks-long hunger strike languishing in a prison hospital after being imprisoned at a notoriously harsh penal colony following efforts to spearhead repeated anti-Putin uprisings. Although Navalny was eventually transferred to a civilian hospital and now is in the process of ending his hunger strike, it is hardly possible to envisage the Kremlin yielding to pressure and releasing him from prison any time soon.

Though the White House is scoring domestically for appearing tough on Russia at a moment of heightened tensions between Washington and Moscow, and imposed retaliatory measures in the aftermath of an intelligence review, Biden and Putin de-escalated. Russia announced the end of the maneuvers along the Ukrainian border, while Biden declared that he will work with Putin on climate change.

The facts are clear: the Russian economy is demonstrating resilience in the face of U.S. sanctions imposed in response to election interference and cyber-attacks, and the Kremlin shows no signs of softening its positions when it comes to the United States. To the contrary, Russian hardliners are concluding there is little to lose when it comes to relations with the West and the prospect of a new cold war is only strengthening their resolve.

To stabilize bilateral relations, U.S. officials must take a longer-term view by pursuing a Russia strategy that—much like American policy at the height of Soviet influence—would appropriately view the authoritarian regime as a formidable threat. Difficult as it may be to accept, Russia’s calculated actions are driven by strategic considerations and rational decision-making. Yet, in the end of the Cold War, then came Mikhail Gorbachev’s reforms. This time it may not be very different.

Though the passage of a recent referendum that modifies Russia’s constitution to allow Putin to serve at least two additional terms and stay in office through 2036 has captured headlines, most analysts believe this is unlikely. The Russian leader turns seventy next year and even he realizes he will need to name a successor at some point. A hidden succession struggle is already in full swing and a virtual game of thrones is underway in Moscow.

Much as U.S. officials may wish otherwise, neither Navalny nor any other pro-democracy dissident is likely to challenge Putin’s reign or dissolve Putin’s Russia.

Forty years ago, the United States did as much as they could to assist opposition leaders like acclaimed Nobel laureate Andrei Sakharov and the outspoken critic of communism Aleksandr Solzhenitsyn. But it was ultimately Mikhail Gorbachev—and later Boris Yeltsin—that dismantled the belligerent regime and made peace with “the Free World.”

In the 2020s, the best means of avoiding a new cold war is a new Perestroika (restructuring)—orchestrated by a leader that can enact much-needed reforms and improve relations with the United States and the West. It is naïve to think that changes to governance of this magnitude could ever be overseen by someone that does not currently hold influence in the house Putin built.

Since the pro-democracy protests in 2011, which Putin considered akin to a CIA plot to overthrow him, there are very few genuinely pro-Western liberal thinkers in the Russian mainstream. Former president Dmitry Medvedev was clearly cast aside as too weak. Anatoly Chubais, Yeltsin’s chief of staff who helped to facilitate Putin’s rise by promoting the young ex-FSB officer from Saint Petersburg to top positions in Moscow twenty-five years ago, is intensely disliked by voters. Alexander Voloshin, Yeltsin’s and Putin’s consiglieri, is too old and prefers to act behind the scenes.

But one leader stands out: Alexei Kudrin, the head of the Accounting Chamber (the Russian Government Accountability Office), the former first deputy prime minister, and twice-decorated finance minister. Today he is also a professor and current dean of the Department of Liberal Arts and Sciences at St. Petersburg State University, is a longtime proponent of free trade and democracy with a well-earned reputation for being a liberal reformer and an independent thinker.

Kudrin also has a reputation as a genuine advocate of the markets and is well regarded for his prudent fiscal management. But he is also a Putin insider having earned the trust of the president’s inner circle during his service as Minister of Finance for over a decade. Even the siloviki—the military-security establishment bosses—deeply respect him.

U.S. officials would be wise to begin working with Kudrin’s team on possible scenarios for improved bilateral relations with Russia after Putin.

At a moment when international relations are becoming more unstable and less predictable—U.S. policymakers must avoid aggravating global tensions when there is little prospect of success and operate pragmatically to avoid unnecessary conflicts. Nowhere is this more true than with Russia.

Sanctions are clearly an important instrument of power to influence Russian foreign policy but an effective stabilization and improvement of bilateral relations will require a longer-term strategy that involves the prospect of a new détente to encourage Putin’s successor to prioritize responsible international behavior and domestic civic freedoms.

The only person in Russia today that can uphold Moscow’s end of this bargain is Alexei Kudrin. White House officials should remember the name. Better yet, they should reach out now.