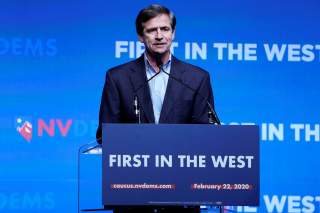 Sestak was a late addition to the already-crowded Democratic field, announcing his run in June. The retired U.S. Navy officer thanked Americans for the “priceless opportunity” the campaign offered, as well as their support, in his announcement Sunday.

“I want to thank you for the honor of running for President of the United States of America,” Sestak said in a statement. “It has been an endeavor filled with immeasurable wisdom, passions, humor and insights to, and from, the people of America.”

Thank you for this opportunity! pic.twitter.com/mW5Qdi3bhT

“It’s a marvelous fabric we Americans have woven together throughout the centuries,” he continued. “I know there is a tear in that fabric right now; but it can be repaired by someone who can lead, and therefore unite, all Americans.”

Sestak, 67, did not make any of the Democratic debates and was sitting at around 0% for most of the polls. He previously served as a Pennsylvania congressman from 2007 until 2011. Sestak also ran for Senate in 2010 and 2016, losing both times, according to Axios.

Sestak began his campaign by announcing that he wanted “to be that president who serves the American people the way they deserve to be served.”