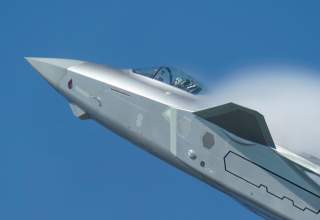 The Chinese air force has tapped a charismatic young pilot to be the spokesman for its growing force of J-20 stealth fighters.

Bai apparently has converted to the twin-engine, stealthy J-20. In 2018 Bai told a reporter his dream was to "fly China’s most advanced fighter jet." That's "an ambition he has now officially achieved," the Hong Kong South China Morning Post reported.

In early January 2019, the PLAAF released a promotional video encouraging young people to enlist in the air arm. The video is part of a recruitment drive that the PLA has organized in 31 of the country’s 33 provinces, according to the South China Morning Post.

According to the South China Morning Post, Beijing hopes Bai's recruitment drive will help staff PLAAF squadrons as the air force re-equips with hundreds of new aircraft every years, including 100 new fighters.

The U.S. Air Force requires 23,000 pilots for its own 5,500-plane fleet. If the PLAAF's manpower requirements proportionally are similar, then it overall could require as many as 12,000 pilots. The U.S. Air Force aims to train 1,500 new pilots every year. The PLAAF annually might need to produce at least a thousand new pilots annually.

In 2017 the PLAAF recruited 1,480 pilot recruits, its biggest-ever pool of trainees, according to the South China Morning Post. The air force sends recruits to university and then on to flight school. Not all recruits graduate university, complete flight training and join a squadron.

But Beijing struggles to recruit new troops. As a result of China's decades-long "one-child policy," most recruits likely don’t have siblings, the Jamestown Foundation in Washington, D.C. reported in 2017.

"The policy ... contributed to China’s dramatic population aging, which according to some estimates will lead to there being two retired people for every working class person by 2050," Jamestown explained. "Population aging could have a chilling effect on recruitment, as more young people are needed in the workforce, with higher paying jobs, to support their parents."

In any event, Bai's recruiting pitch is aspirational. Only a few of the PLAAF's recruits will ever pilot a J-20. The heavy stealth fighter first flew in 2011 and entered service in late 2017. A year later, the PLAAF had just 20 of the jets, according to the South China Morning Post.

In January 2019, the South China Morning Post estimated the Chinese air force had at least 16 J-20 pilots. The U.S. Air Force aims to employ at least two pilots for every fighter, as a single jet typically can fly more often than a single person can do. USAF fighter pilots on average fly 200 hours annually.

But even Chinese pilots flying less sophisticated fighters could be in for more exciting training than their predecessors experienced.

Around 2016 the PLAAF reformed its pilot training to make it more realistic. "The core of the reform is an effort to train pilots to fight under what the PLA refers to as 'actual-combat conditions,'" the California think-tank RAND reported.