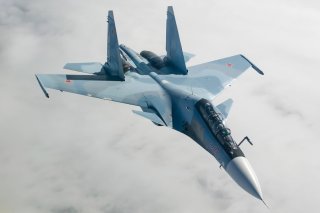 While President Joe Biden was traveling in Asia, the Russian and Chinese air forces conducted a joint aerial patrol in the Pacific region. Should the West be concerned by Beijing and Moscow’s growing military cooperation?

According to the Global Times, a Chinese government-backed newspaper, the joint patrol, which occurred over the Pacific for the fourth consecutive year between Russia and China, aimed at establishing a “high-level of military cooperation.”

The Global Times praised greater cooperation between Russia and China at a time when both countries were “facing stern, provocative pressure from the US and the West.”

While the joint air patrols, which reportedly took thirteen hours, were described as routine and not related to a particular recent event, the paper did reference Biden’s recent comment that the United States would intervene militarily should China seek to annex Taiwan. The Global Times pointed out that the timing was significant: The language used in the report accused the United States and its allies of “pressuring” and trying to “weaken” Russia.

“The joint patrol came at a time not only when US President Joe Biden is visiting Japan and amid the QUAD [Quadrilateral Security Dialogue] summit that aims to contain China, with Biden saying on Monday the US would intervene militarily if the Chinese mainland were to reunify with the island of Taiwan by force, but also during the Ukraine crisis in which the US-led West is putting a large amount of pressure in attempts to weaken Russia,” the Global Times wrote.

While a joint Russo-Sino patrol involving fighter jets and bombers may seem concerning in some respects, it is extremely unlikely that Russian forces would intervene in any conflict between China and the West regarding Taiwan. Similarly, China is clearly making efforts to distance itself from Russia’s war in Ukraine. The two authoritarian countries have been conducting joint exercises and conducting military exchanges for many years, yet that kind of collaboration does not guarantee that the two countries would intervene and fight alongside one another should a conflict erupt.