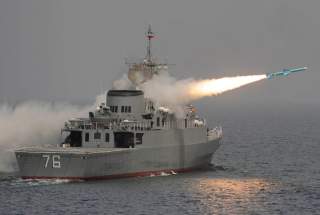 Key point: Tehran keeps coming up with "new" technology and weapons that aren't always what they seem to be.

The Iranian navy added a brand new, domestically-made stealth destroyer to its fleet on Saturday, Reuters reports, deploying the warship and its purported radar-evading systems to join rest of the country’s regular navy at the mouth of the strategically-crucial Strait of Hormuz in yet another challenge to the U.S. Navy.

- The new Sahand destroyer, the first in a new family of Iranian warships, was “the result of daring and creative design relying on the local technical knowledge of the Iranian Navy… and has been built with stealth capabilities,” Iranian navy shipyard chief Rear-Admiral Alireza Sheikhi told state TV.

- The unveiling of the destroyer represents the latest technological challenge to the U.S. Navy vessels operating in the region. In October, the Iranian military claimed it had boosted the range of its land-to-sea ballistic missiles up to 700 km (435 miles), capable of hitting “any vessel or ship” at that range.

- While the Iranian navy has, for the most part, scaled back its harassment of U.S. Navy vessels in the Persian Gulf since President Donald Trump took office, these advances in the Persian Gulf pose a growing threat to military personnel there following months of growing tensions over freedom-of-navigation operations in key regional waterways.

- “We remain committed to providing and promoting security and stability in the region and continue to stand with our partners to sustain freedom of navigation and free flow of commerce in international waterways,” U.S Naval Forces Central Command Cmdr. Joshua Frey told Task & Purpose in a statement at the time. “We advocate for all forces to conform to international customs, standards, and laws.”

- Even if the Sahand doesn’t become the primary instigator in confrontations between the two, a successful demonstration of its stealth capabilities could prove embarrassing to the U.S. Navy. After all, as The War Zone reported in September, the Navy’s beleaguered USS Zumwalt may be the least-stealthy “stealth” ship currently on the high seas.