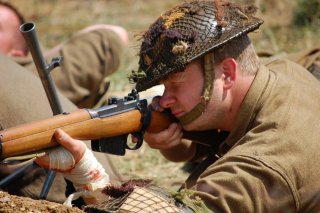 While not technically an infantry weapon, the Boys Anti-Tank Rifle did see a variety of uses during the early stages of World War II. The gun was developed by Captain H C Boys prior to the war, and it was adopted for service in 1937. It was used against lightly armored German tanks and combat vehicles, and Britain also supplied Boys to Finland for use against the Soviet Union in the Winter War.

However, by 1941, as tank armor increased, the gun was essentially ineffectual as an anti-tank weapon. The .55 Boys cartridge was still useful against bunkers, machine gun nests, and light-skinned vehicles, and the gun remained in service until 1943 when it was replaced by the American .50 caliber M2 Browning machine gun.