The Jones Act: Critical to U.S. Shipbuilding, Or an Outdated Burden on U.S. Consumers? 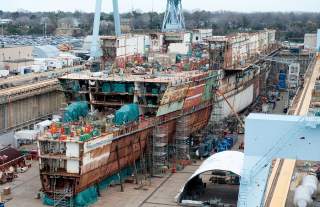 Earlier this month, President Donald Trump again demonstrated his commitment to a strong U.S. economy, to job growth and to national security. He did this by the simple act of refusing to sign a waiver to the Jones Act that would have permitted foreign-flagged liquid natural gas (LNG) carriers to operate between U.S. ports. The Jones Act is a nearly 100-year-old law that requires cargoes carried between U.S. ports be carried in vessels built in the United States, operated under the U.S. flag and crewed by American seamen. It is vital to sustaining the American shipbuilding and repair industry and to the maintenance of a fleet of commercial cargo ships and the mariners who operate them.

Without this fleet, the United States would be unable to project significant military forces into foreign theaters or sustain them once deployed. Rather than bowing to pressure to weaken or even repeal the Jones Act, President Trump drew a line in the sand against deindustrialization and significant job losses. He also set the stage for the construction of American-built and -operated LNG tankers. But if the president really wanted to revitalize the shipbuilding industry and America’s commercial cargo fleet, there is more he could do.

The arguments in favor of a waiver seems straightforward enough. Energy consumers in the northeast United States and Puerto Rico are forced to buy more expensive foreign natural gas rather than getting it from American producers at lower prices because there are no Jones Act compliant LNG carriers. Critics assert that this has a negative effect on consumers and, indirectly, on local economies.

There are three problems with this argument. First, with respect to the northeast United States, there is a lack of sufficient pipeline capacity and restrictions on shipping LNG by rail. These bottlenecks are largely the result of opposition from environmentalists both to additional pipeline construction and to transporting LNG by rail.

The second problem, one common to most past criticisms of the Jones Act, is a too-narrow view of the economic costs and benefits of the Jones Act. Arguments in favor of a waiver do not adequately reflect the costs to the Nation’s maritime industry of such a decision. Nor do they consider the job losses that would result. The net effect of a waiver would be negative for the U.S. economy.

In addition, some opponents of the Jones Act mischaracterize it as outmoded economic protectionism. In fact, today, the Jones Act is a reasonable response to the predatory practices of foreign shipyards and shipping companies. Foreign governments routinely subsidize ship construction directly or through advantageous tax policies. Foreign-flagged ship operators are able to take advantage of lax safety and compensation rules to undercut U.S. shippers’ prices.

Proponents of weakening the Jones Act by allowing foreign-flagged LNG carriers to operate in U.S. waters fail to understand President Trump’s commitment to this country’s reindustrialization, with the attendant creation of high-paying jobs. The president has demonstrated his belief that supporting basic industries, such as steel production and ship construction, is vitally important to maintaining a strong military.

The most compelling argument in favor of retaining and even strengthening the Jones Act is its value to U.S. national security. The United States is perilously close to losing the ability to move military forces overseas and sustain them once deployed. Even with the Jones Act, the U.S.-flagged commercial shipping fleet continues to shrink. There are only six ships in the Ready Reserve Fleet capable of moving fuel and petroleum products in the event of war. In the event of a major conflict, the United States cannot count on access to foreign-owned and -operated cargo carriers, many of which are Chinese-flagged.

The Jones Act is more important today than when it was promulgated. The maintenance of a fleet of U.S.-flagged, active, commercially-viable, militarily-useful and privately-owned cargo vessels is vital to ensuring that the military can respond to any wartime need. The requirement that Jones Act vessels be built and repaired in U.S. shipyards is vital to ensuring the viability of this important sector of the economy. In addition, the Jones Act helps to maintain a pool of U.S. merchant sailors who can be called upon to man government-owned sealift ships that are reactivated to support a wartime sealift effort. The Jones Act also is an important tool for homeland security, in particular by helping to secure the 25,000 miles of navigable inland waterways of the United States.

Those arguing for a Jones Act waiver for the transport of LNG are right on one count. Yes, the lack of available U.S.-flagged LNG tankers means that domestic purchasers, particularly in New England and Puerto Rico, must buy somewhat more expensive foreign natural gas in order to be able to access foreign-flagged carriers. But this should be viewed as a temporary condition. The right solution is not a Jones Act waiver, which would simply ensure foreign domination of the U.S. LNG trade, but a concerted effort to support the expansion of the U.S.-built and -operated fleet of large fuel and petroleum product transports, including LNG carriers.

A recent study by the Center for Strategic and Budgetary Assessments, on resilient maritime logistics, made a compelling case for a substantial increase in both the Navy-owned and -operated logistics force and the U.S. commercial cargo fleet. This study recommends increasing the stipend paid by the Maritime Administration to U.S. companies with militarily useful tankers in exchange for the ability to access these ships in the event of a national security crisis. It also calls for an increase in the percentage of U.S. government cargoes, including fuel, to be carried on U.S.-built and -flagged ships. Third, it recommends changing tax policy with respect to U.S. commercial shipping to be more in line with foreign practices. President Trump made the right decision when he refused to grant a Jones Act waiver for the transport of LNG. Now is the time for the White House to support the U.S. commercial shipping industrial base by changing government policies. This would be good for the economy and national security.