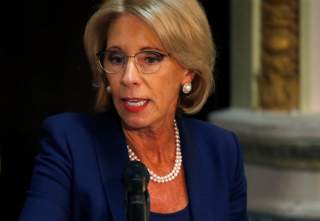 U.S. Magistrate Judge Sallie Kim imposed a $100,000 fine on DeVos for violating a court order that mandated DeVos stop collecting student loans owed by students at defunct Corinthian Colleges, according to Politico, which noted that it is highly unusual for a judge to hold the head of an agency in contempt.

The Trump administration previously asked Kim to avoid imposing fines or holding DeVos in contempt, saying the Department of Education had “been working diligently and in good faith to correct errors,” Politico reported.

The lawsuit named DeVos in her capacity as DOE secretary. The government will pay the $100,000, and DeVos will not be personally responsible for the sum.

The DOE, which did not respond to requests for comment from the Daily Caller News Foundation, tweeted about the ruling Thursday night.

“We’re disappointed in the court’s ruling. We acknowledged that servicers made unacceptable mistakes.”

“It’s a rare and powerful action by the court to hold the secretary in contempt,” said Director of Harvard Law School’s Project on Predatory Student Lending Toby Merrill.

The Project on Predatory Student Lending represents the students in the lawsuit.

“It reflects the extreme harm that Betsy DeVos and the Department of Education have caused students who were already defrauded by a for-profit college,” Merrill added.