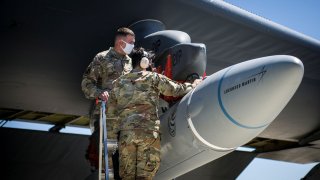 In a news release, the Defense Advanced Research Project Agency, or DARPA, announced that two variants of their Hypersonic Air-breathing Weapon Concept just successfully completed captive carry tests. During these non-release type tests, the weapon remains attached to the carrier airframe via a weapons pylon and is intended to gather data on the flight characteristics of the weapon and the airframe carrying the missile during flight.

The HAWC program is a joint DARPA and U.S. Air Force technology demonstration project that also includes a number of other government agencies and private companies, including NASA, the U.S. Navy, and the Missile Defense Agency. The two private companies working to develop the HAWC are Lockheed Martin and Raytheon Technologies.

While one of the project goals is to eventually produce a hypersonic missile, the data gathered by the project would likely be used in the future for developing other hypersonic weapons, DARPA explained. “The extensive flight data collected is intended to increase the confidence in air-breathing hypersonic systems and reduce the risks to potential future acquisition programs across the U.S. government.”

Both companies are currently developing separate hypersonic prototypes, information on which is rather scarce. According to the DARPA release, both companies are focusing on “hydrocarbon scramjet-powered propulsion and thermal management techniques.” As the scramjet engine is air-breathing and generally not operable at low speeds, it is assumed that a rocket module would be used to bring the HAWC up to speed, at which point the scramjet would take over.

HAWC is not the only hypersonic missile project the military is working on however. The Air Force’ ambitious Mayhem project involves only “hypersonics-knowledgeable contractors” that include Raytheon Technologies, Lockheed Martin’s Skunkworks, and Boeing. The Air Force believes that a preliminary design can be completed in as little as fifteen months, indicating that the companies selected already have more advanced knowledge of hypersonics.

Hypersonic missiles are the next frontier in weapons development—and an area that both Russia and China are hoping to excel in. Russia’s Avanguard hypersonic missile is said to be an intercontinental ballistic missile with a nuclear warhead capable of maneuvering during its terminal flight phase. If true, this would make the missile incredibly difficult to defend against. Moscow also touts the Zirkon anti-ship missile—which can also be launched underwater from submarines.

According to the Office of the Secretary of Defense, China is also no newcomer to the hypersonics race. In 2018 Beijing successfully tested the XINGKONG-2 (also called Starry Sky-2), a hypersonic wave rider-type missile. Another missile called the DF-17 has been seen during Chinese military parades as well.

Though far from over, the recent DARPA test is an important marker on America’s hypersonics journey. Watch this topic for further information on American hypersonic as new details emerge.