Just How Dangerous? Will the U.S. Navy's New Destroyers Rule the Oceans? 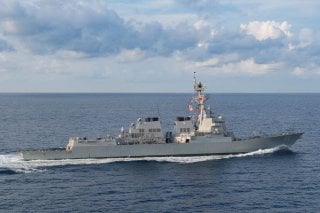 It may be far too early for the U.S. Navy to cultivate any kind of integrated picture of what its Future Surface Combatant may ultimately look like, given that the ship is not anticipated to arrive until the 2030s. However, the Navy’s plan for new generation of destroyers invites a consideration of certain key technical trends and tactical goals likely agreed upon by Navy futurists now exploring conceptual work on the ship.

A few things can unequivocally be understood, by virtue of Navy strategies, plans and current modernization activities. The service plans to extend its successful fleet of DDG 51 Arleigh Burke class destroyers for many years to come, and it seems clear that current near-term modernization trends are likely to shape any conceptual approach to 2030.

Many elements of the existing Zumwalt-class and DDG 51Flight III destroyers arguably inform the conceptual foundation of what the Navy envisions for a new generation of destroyers. There are what might be considered somewhat self-evident areas of focus, such as power-scaling lasers, and newer networked command and control for the operation of ocean drones. Other considerations include advances in radar sensitivity such as the SPY6 and EW and laying the technical foundation to accommodate a new generation of emerging weapons. Perhaps of most critical importance, cyber hardening and the expansion of AI-empowered computer systems. As for stealth, that seems like very much of an open question, as it seems that it would be challenging to merge some of the stealthy characteristics of Zumwalt with the massively armed Flight III DDG 51 destroyers. After all, DDG 51s rely upon a wide range of externally-mounted sensors, antennae, deck-launched weapons and mast configurations.

Several existing areas of technical examination seem to present themselves as areas of likely focus, as they offer a foundation upon which subsequent future systems could be evolved. One obvious weapon is lasers, as there is much room for growth. Current work is geared toward power-scaling and form-factor miniaturization, two trajectories intended to expand the tactical envelope for lasers. Stronger beams, involving the merging of several beams into a single weapon, can destroy larger objects, increase range and vastly improve the effects “scalability” of lasers. For instance, larger, more powerful lasers can adjust from “disrupt” or “damage” mode to “destroy” mode, depending upon the application. Strong lasers could take out enemy helicopters, surface combatants or even fighter jets. Also, the Navy is doing early work on hardened, longer-range laser weapons perhaps being able to perform advanced missile defense missions at much higher altitudes, or lasers less prone to weather-induced beam attenuation. Of course, lasers are cheaper than interceptor missiles, and advances in electrical power projection such as the Zumwalt’s electrical propulsion Integrated Power System offers itself as a potential window of exploration. In addition, AI-enabled integrated ship defenses should be a huge area of focus, as advanced algorithms are increasingly able to gather, organize, analyze and transmit near-real time combat-sensitive information. Enabled by a limitless database of historical scenarios, available weapons and specific enemy threats, computer programs could instantly perform analytics on multiple variables at one time, all while enemy attacks are incoming, to give commanders immediate information regarding which defensive or counterattack options would best fit the situation.

Along with lasers and on board electrical power able to accommodate more computing power and new weapons systems, autonomy and drone-focused command and control will likely figure prominently. For instance, the Navy is looking much more closely at employing small fleets of unmanned surface and undersea vessels, to be controlled by “motherships” where humans perform command and control. This is already underway with the Navy’s amphibious attack strategy and could easily be applied to destroyers and Carrier Strike Groups. Perhaps a future destroyer could command large numbers of networked, forward operating air, surface and undersea drones all performing coordinated missions with advanced levels of autonomy. Under human control, they could fire weapons such as torpedoes, lasers or even some interceptor missiles, something the Navy is already exploring. They could more safely conduct undersea, surface or aerial reconnaissance as well. Why couldn’t some kind of medium-to-large sized unmanned platform contain Vertical Launch Systems, deck-mounted guns or surface-fired long-range missiles?

Weapons and sensor range, cross-domain networking, autonomy and especially drones will undoubtedly rule the day. This will certainly be the case when looking at current technical areas of promise, anticipated future maritime warfare environments and methods of confronting the many as-of-yet-unknown mysteries of future warfare. It would not be a stretch to recognize that AI, drones, networking and electrical power will all figure prominently.