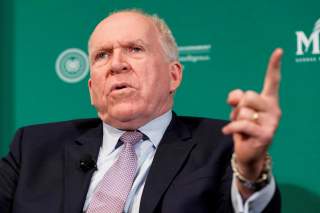 U.S Attorney John Durham is seeking the emails, call logs and other communications of former CIA Director John Brennan as part of a broad investigation into the origins of the Trump-Russia probe, according to a report.

The New York Times, citing three sources familiar with the matter, reported that Durham, the U.S. attorney in Connecticut, is looking at the role that Brennan played in assessing that the Russian government interfered in the 2016 election specifically to help Donald Trump.

Durham also wants to know about Brennan’s views of the Steele dossier, the Democrat-funded opposition research that alleged a “well-developed conspiracy of co-operation” between the Trump campaign and Russian government.

Brennan has said that the CIA did not use the dossier, which was written by former British spy Christopher Steele, in its assessment regarding Russian interference in the election.

FBI officials, including then-Director James Comey and then-Deputy Director Andrew McCabe, pushed to include the dossier in an Intelligence Community Assessment (ICA) on Russian election meddling that was published on Jan. 6, 2017. A summary of the dossier was ultimately put in an appendix to the ICA.

Barr has said that Durham is looking into whether the agencies scrutinized Trump associates before the FBI officially opened its counterintelligence investigation of the Trump campaign on July 31, 2016.

The Justice Department’s inspector general released a report on Dec. 9 that said that the FBI made “significant inaccuracies” in applications for surveillance warrants against former Trump campaign adviser Carter Page.

The dossier played a “central and essential” role in the FBI’s decision to seek the warrants, according to the IG. But the report also said that the FBI failed to disclose information that undercut Steele’s credibility and called the veracity of information in the dossier into question.

The IG report provides some insight into discussions between the CIA and FBI regarding whether to use Steele’s information in the ICA, which said that the Russian government meddled in the 2016 election in order to help Trump, rather than merely to sow discord in the U.S. political system.

One FBI official told investigators with the IG’s office that the CIA viewed the dossier as “Internet rumor.” But Brennan has said in interviews since leaving the CIA that Steele’s information was viewed as credible because it tracked with other intelligence that had been collected regarding Russia’s activities.

“There were things in that dossier made me wonder whether or not they were in fact accurate and true,” Brennan said in an interview on Feb. 4, 2018. “I do think it was up to the FBI to see whether or not they could verify any of it. Jim Comey has said it contained salacious and unverified information. Just because it wasn’t unverified doesn’t mean it wasn’t true.”

Brennan also said in the interview that he first heard about information now known to be in the dossier from reporters in late Summer 2016. He said he did not see the Steele information until December 2016.