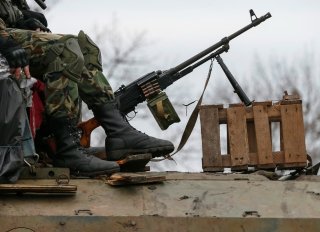 The Russian-based arms manufacturer Kalashnikov Concern unveiled a prototype of its new RPL-20 belt-fed light machine gun last year. An entirely new design, the RPL-20 is expected to serve as a squad automatic weapon in the Russian military. Its higher practical rate of fire means it is also expected to supplement the heavier-caliber PK machine guns currently used for suppressive fire. It would be the first squad-level, intermediate caliber, belt-fed machine gun to see service with Russian (formerly Soviet) infantry since the retirement of the RPD in the early 1960s.

The new Kalashnikov light machine gun hasn’t entered service yet, but the Kalashnikov Group has announced that it intends to develop modifications that will allow it be produced and chambered for different calibers.

Urzhumtsev said the weapon could hit the target with foreign buyers that are seeking a new class of fire support weapon.

“Russia is not yet a supplier of light machine-guns and the Kalashnikov has an opportunity to enter this very competitive market with its products,” Urzhumtsev added.

According to the Kalashnikov Group, the RPL-20 will be operational in the coming years with the Russian Army’s airborne force and special operations units.

Key Attributes of the new RPL-20

The RPL-20, which was first introduced at an arms trade show in August 2020, isn’t actually a derivative of the ubiquitous Kalashnikov-pattern rifles series. Instead, the belt-fed, gas-operated, fully automatic light machine utilizes an open-bolt with a rotating bolt and long-stroke gas piston. Similar to PK/PKM machine guns, the belt is fed from the right side of the gun and the spent cases are ejected to the left. It offers a rate of fire of upwards of six hundred rounds per minute.

The new light machine gun features a quick-change barrel, which was shown at the 2020 arms show with two different length barrels. The folding and collapsible stock also has an adjustable cheekpiece based on the stock design used in the AK-19 and updated AK-12 rifles. The pistol grip, which features an integrated trigger guard, also seems to be identical to the one seen on the updated AK-12.

The RPL-20 includes an ambidextrous safety selector, non-reciprocating charging handle, ejection port dust cover, folding front iron sight, top and bottom Picatinny rails, M-LOK slots on the handguard, and Picatinny rail-mounted carry handle. The reported overall weight of the RPL-20 is 5.2 kilograms or 5.5 kilograms, or about twelve pounds, depending on the barrel length.

The Kalashnikov Group said last year that adoption and production of the new light machine gun could take two to three years. It seems on track to enter service by 2025 or 2026. Yet, like all new Russian hardware, delays should be expected.