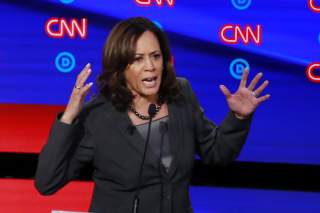 During Wednesday night’s Democratic presidential debate, Tulsi Gabbard tore into Kamala Harris for her track record as a prosecutor in San Francisco and later as California’s Attorney General. The attack was sharp and effective, earning Gabbard an outsize share of the post-debate commentary. Its thrust was entirely fair, too, as any number of articles have demonstrated, including Lara Bazelon’s recent takedown in The New York Times titled Kamala Haris Was Not a Progressive Prosecutor.

The real significance of Gabbard’s critique, however, lies not in the proposition that Harris was a particularly unprofessional or malign prosecutor, but rather in the fact that she seems to have been a rather ordinary prosecutor who simply did her job the way most prosecutors do. And if that makes a former-prosecutor-turned-presidential-candidate look like a monster, then perhaps that says more about prosecutors in general than it does about Kamala Harris in particular.

Gabbard’s gut-punch underscores the difficult position that modern prosecutors find themselves in as the key players in a substantially immoral and increasingly indefensible criminal justice system. A near-universal blind spot of career prosecutors like Harris is their failure to appreciate the fact that law and morality can—and in our system frequently do—diverge.

Is it hypocritical for a person who has used marijuana to prosecute someone for possessing or selling it? Plainly yes, as Gabbard suggested in calling out Harris for doing precisely that. But enforcing bogus laws is not just hypocritical, it can be immoral as well. Consider the Fugitive Slave Act of 1850, a federal law that, among other things, required citizens of free states to assist in the capture and return of escaped slaves. Or eugenics laws adopted by more than half the states during the 20th century that subjected tens of thousands of law-abiding citizens, mostly young women, to forced sterilization and a childless future. Then there’s Shreveport, Louisiana’s ordinance making it a crime to wear saggy pants. Some 726 men, 96 percent of them black, were arrested under that law between its adoption in 2007 and its repeal in June of this year, after a Shreveport officer shot and killed 31-year-old Anthony Childs while trying to arrest him for wearing pants that didn’t come up to his waist. All of those laws were immoral, and participating in their enforcement constitutes a manifestly immoral act.

Though prosecutors often claim they have no choice but to enforce the laws as written, that simply isn’t true. First and foremost, of course, they can resign. Second, they can exercise prosecutorial discretion to make better—and more ethical—use of law enforcement resources. Indeed, in an era when police solve fewer than two-thirds of all homicides and thousands of rape kits go untested, the fact that there were more arrests for marijuana possession in 2017 than for all violent index crimes (murder and nonnegligent manslaughter, rape, robbery and aggravated assault) combined is obscene. Finally, line prosecutors may simply refuse to work on certain types of cases as a matter of principle.

So there are some laws that are immoral to enforce at all. Other laws are immoral to enforce against certain people under certain circumstances. For example, whatever the morality of prosecuting people who prefer the safest of the three most popular mood-altering substances in America (alcohol, tobacco, and marijuana), it is certainly immoral to enforce marijuana laws against people who suffer from cancer, seizures, PTSD syndrome, or wasting diseases like AIDS, particularly when it appears no other therapy offers comparable—or, in some cases, any—relief.

Besides enforcing laws that are substantively immoral, prosecutors routinely employ a vast array of morally indefensible tactics in the ordinary course of their business. These immoral practices are too numerous to catalogue here, but examples include:

- Overcharging and charge-stacking in order to increase a defendant’s exposure to punishment—and willingness to plead guilty. Federal prosecutors did this when they hit Internet genius Aaron Swartz with a 13-count indictment exposing him to 35 years in prison and a million-dollar fine for breaking into a computer closet at MIT and initiating a mass-download of articles from the JSTOR academic database. The feds offered a six-month plea deal, but Swartz died by suicide during plea negotiations. That sort of tactical overcharging-then-discounting is absolutely routine in both state and federal prosecutions.

-Using grossly excessive mandatory-minimum sentences to coerce defendants into pleading guilty. A Kentucky prosecutor did this when the defendant in an $88 check-fraud case rejected his plea offer of five years, prompting the prosecutor to follow through on his threat to reindict the man as a habitual offender, thereby exposing him to a mandatory life sentence, which the Supreme Court upheld in Bordenkircher v. Hayes (1978) when the defendant went to trial and lost. “Lawful but awful,” as judges sometimes say in acknowledging the fundamental injustice of their rulings.

- Threatening to indict friends or family members if the defendant refuses to plead guilty. Criminal defense attorneys say this happens all the time, particularly in federal prosecutions.

- Threatening potential defense witnesses in order to discourage them from testifying. The Enron prosecutors were credibly accused of doing this with dozens of witnesses in a deliberate attempt to sandbag various defendants.

- Engaging in plea negotiations while withholding so-called Brady material favorable to the defense that the prosecutor knows will have to be disclosed if the case proceeds to trial.  True to character, the Justice Department offered a full-throated—and ultimately successful—defense of this practice in a 2017 amicus brief before the Fifth Circuit Court of Appeals.

- Insisting that a defendant waive various rights as a condition for accepting a plea offer. These rights include the ability to subsequently FOIA prosecutors’ case file to see whether they withheld Brady material or to appeal one’s sentence if a legislature reduces the sentencing range for the crime at issue in the future.

- Resisting reasonable post-conviction DNA-testing requests. This nearly uniform practice, including by Kamala Harris, is particularly galling given that 365 people have been exonerated through DNA tests by the Innocence Project since 1989.

While these practices are legal and widespread, they are also immoral. For too long, too many prosecutors have embraced the fallacy that if the law allows them to do something, then it must be morally acceptable to do it. But public reaction to Tulsi Gabbard’s attack on Kamala Harris—again, not for being a particularly vicious prosecutor, but rather for being a perfectly ordinary one—suggests it might be time for prosecutors to reconsider that fallacy—particularly if they aspire to higher office.

Clark Neily is vice president for criminal justice at the Cato Institute, where this first appeared.