Kazakhstan Lies at the Center of the New Great Power Competition 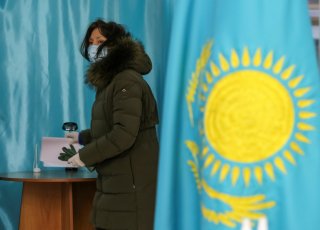 As the Biden administration is facing the foreign policy challenges from a rising China and snarling Russia, U.S. attention should remain focused on Central Asia—the great expanse of three time zones, which both Moscow and Washington recognize as a nuclear-free zone. The strategic region is land-locked and borders four nuclear powers: China, Russia, Pakistan, and India, and the nuclear aspirant Iran.

Boasting the second-largest oil reserves in the former USSR and home to all the rare earths of the periodic table necessary in energy transition, Kazakhstan is the heart of Central Asia. Since its independence in 1991, the United States paid close attention to Kazakhstan, the country which remained stable in the surrounding political turmoil.

The latest Kazakh parliamentary elections that took part on January 10, gave ruling party Nur Otan (“Light of the Fatherland”) a mandate to lead with 72 percent of the vote. The results speak to the stability of the political system built under the modern Kazakhstan’sfounder, Nursultan Nazarbayev.

President Kassym-Zhomart Tokayev, Nazarbayev’s successor, spoke January 15 at the opening session of the new parliament, outlining a package of political reforms meant to gradually democratize the country. Thirty years since declaring independence from the Soviet Union in 1991, Kazakhstan has developed its economy and strengthened its own national identity.

The latest round of elections opens the door to political reforms, openness, and“controlled democratization,” with the President announcing he would lower the threshold for parties to win seats in parliament from 7 percent to 5 percent. Kazakhstan is also including a ‘vote of no confidence’ in future elections, giving the people a chance to express discontent with the whole system.

A number of further political reforms were implemented in the run-up to the elections—notably the first live debate among leaders of political parties. In addition, Tokayev envisions the expansion of civic participation. One of the more progressive reforms made by Tokayev has been the liberalization of political protest. Kazakhstan has cut waiting times to receive permission to hold a rally from fifteen days to just five days, and, peaceful rallies no longer need explicit permission from local authorities, merely a notice of the intent to demonstrate,

A cornerstone of the reforms is political modernization and the strengthening of political competition, including setting a 30 percent quota for women and youth to be represented within national parties. Tokayev is pushing for the election of local mayors, which he envisions as a bridge to electing district governors throughout the country. On the national level, Kazakhstan will legalize the use of online petitions in order to increase civil participation in the decision-making process.

Neighboring Russia is watching the neighbor’s reforms with suspicion. Recent provocative statements from Russian lawmakers have strained the relationship between Moscow and one of its oldest allies. Vyacheslav Nikonov, a lawmaker with the ruling United Russia party and grandson to Vyacheslav Molotov, Stalin’s closest henchman, casually dismissed the Kazakh nation-building in blood-curdling remarks to Russian state television in December, describing Kazakhstan’s vast territory as a “gift” from the Soviet Union. Nikonov’s comments were soon echoed by other lawmakers, most notably Yevgeny Fedorov, head of the National Liberation Movement—whose political platform advocates for the restoration of the USSR. Similar remarks made by Vladimir Putin in the wake of the 2014 annexation of Crimea postulated that Kazakhstan's first President Nursultan Nazarbayev “created a state on a territory that never had a state. Kazakhs never had any statehood, he created it.” Despite these tensions, Kazakhstan, is shifting towards a globally-oriented foreign and economic policy, a trend which only heightens Moscow’s objections.

In an op-ed published by Kazakhstani newspapers on January 5, “Independence Above All”, Tokayev divided the country’s recent history into three decades. In the first, he described the laying of the foundation of the Kazakh state—the establishment of diplomatic relations, a national currency, the armed forces, and basic law. The second included the building of a new national capital Astana and the organization of a summit of the Organization for Security and Co-operation in Europe. The third decade was described by Tokayev as defined by economic growth and the adoption of the “Kazakhstan-2050” strategy in 2012—which aims to bring Kazakhstan into the ranks of the world’s top thirty most developed countries by 2050. Going forward, the President envisions Kazakhstan developing into a strong and globally competitive nation. He spoke with regret about the totalitarianism experienced under the USSR, saying that

We almost lost our traditions, language and religion. Thanks to Independence, we were able to revive and strengthen our values. But if we want to survive as a nation and a State, present and future generations must be prepared for new challenges.” Tokayev also warns the Kazakh people to not “[succumb] to the influence of an alien ideology.”

Tokayev‘s efforts to improve the business climate and institutional policy-making framework have significantly bolstered Kazakhstan’s economic standing and created a real-world model to try and escape the “middle-income trap.” These economic changes, and the efforts to build a national identity, will continue to irk Moscow as Russia perceives a shrinking in its sphere of influence.

While fears of a Crimea-style invasion may be exaggerated, Tokayev’s political reform is necessary to keep the country developing. While Kazakhstan faces a number of institutional growing pains stemming from the Soviet past, saber-rattling by Moscow cannot undo the country’s achievements. And the United States will continue developing economic, educational, security, and diplomatic ties with the beating heart of Eurasia.

Ariel Cohen, Ph.D., is Senior Fellow (non-resident) at The Atlantic Council and Director of the Program on Energy, Growth and Security at International Tax and Investment Center. He is the Founding Principal of International Market Analysis and the author of Kazakhstan: The Road to Independence: Energy Policy and the Birth of a Nation (SAIS Johns Hopkins).