Kazakhstan, Not Russia, Was the Last Republic to the Leave the USSR 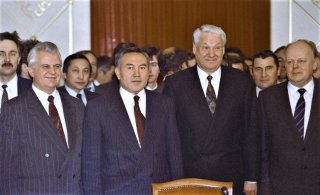 Moreover, its capital was the site of the Alma-Ata Protocol, where leaders from the former Soviet Union agreed that on December 21, 1991, the Soviet Union was officially dissolved, while the Commonwealth of Independent States was formed. The Soviet Union officially ceased to exist as a sovereign state days later, and Kazakhstan became an internationally recognized independent state.

The Decline of the Soviet Union

The origins of this bizarre turn of events goes back to December 30, 1922, when revolutionary Bolsheviks, who had overthrown the Russian provisional government, established a socialist state and joined Russia with its neighbors to form the USSR under its first leader Vladimir Lenin. Among those states was the Kazakh Autonomous Socialist Soviet Republic, which remained an autonomous republic of the Soviet Union within the Russian Soviet Federative Socialist Republic (RSFSR) from 1920 until 1936.

It then existed as the Kazakh Soviet Socialist Republic from 1936 until 1991. At 2.7 million square kilometers (1.05 million square miles), it was the second-largest republic in the USSR, after the Russian SFSR. Its capital was Alma-Ata–today Almaty–the site of those protocols that brought an end to the Soviet Union.

The breakup of the Soviet Union was a long time coming. It has been argued that the communist power had been on its sickbed for several years by the time fifty-four-year-old Mikhail Gorbachev came to power as the eighth and last leader of the Soviet Union. It was unable to compete with the West economically, and Gorbachev believed reform was necessary for survival.

That included his policies of political openness known as "glasnost," which brought new freedoms and democratic elections; and "perestroika" or "economic rebuilding," which loosened the government's control on the economy and even permitted limited private enterprises.

The historic changes earned Gorbachev the Novel Peace Prize, while Time magazine proclaimed him the "Man of the Decade." Yet, instead of solving the Soviet Union's woes, the measures hastened its demise.

Breakup of the Warsaw Pact

As the Soviet Union was loosening its grip on its people, many of the Soviet satellite states began to break away. Poland and Hungary were the first to reject their communist governments. Soon after, Czechoslovakia and Bulgaria also broke away, and on November 9, 1989, the Berlin Wall in Communist-controlled East Germany fell. Unlike in 1956 in Budapest and 1968 in Prague, the Soviet Red Army didn't roll in—instead Gorbachev declined to intervene.

Romania's communist rule also ended in December 1989 in a brief but bloody revolution that even resulted in a trial and subsequent execution of Dictator Nicolae Ceaușescu and his wife Elena. Again, the Soviets opted not to intercede.

Today, all of those former Soviet satellites are now part of NATO, an outcome that would have seemed unthinkable just a few years earlier.

Fall of the Soviet Union

Just months later, after the Warsaw Pact was dissolved, Lithuania essentially declared quasi-independence from the Soviet Union and was joined soon after by Estonia and Latvia. Leaders in the three Baltic States argued that they had been illegally forced into the Soviet Union in 1940 during the Second World War. Yet, the Soviet Union continued to persevere, and on August 18, 1991, Communist hard-liners placed Gorbachev under house arrest.

However, their coup failed after crowds rallied around Boris Yeltsin, who had dramatically quit the Communist Party a year earlier and later became the first president of the Russian Federation. Within months, the Soviet Union—once seen as the mightiest power in the world—was unraveling. Georgia had already declared independence, and it was followed by Ukraine just days after the coup, followed by Belarus, Moldova, Kyrgyzstan, Uzbekistan, Tajikistan, Armenia, Azerbaijan, and Turkmenistan.

By December the once-great Union of Soviet Socialist Republics consisted only of Russian SFSR and Kazakh SFSR. On December 8, representatives from Belarus, Russia, and Ukraine met in Brest, Belarus, and declared that the Soviet Union no longer existed. Four days later, on December 12, Russia then abandoned the Union leaving only the Kazakh Soviet Socialist Republic as the sole member of the Soviet Union.

So for four days, until December 16, world maps would have shown the USSR as being located solely within what is today Kazakhstan. But the story has a final noteworthy twist. That is because while Kazakhstan officially seceded, the Soviet Union itself wasn't formally disbanded until December 26, 1991–which means for those ten days it was a nation that existed with no territory.

Gorbachev formally resigned as Soviet President one day prior, on December 26, before vacating his office for Yeltsin to take over.

"Due to the situation which has evolved as a result of the formation of the Commonwealth of Independent States, I hereby discontinue my activities at the post of President of the Union of Soviet Socialist Republics," Gorbachev said in his final official address.

"The policy prevailed of dismembering this country and disuniting the state, which is something I cannot subscribe to," he added. "We're now living in a new world. An end has been put to the Cold War and to the arms race, as well as to the mad militarization of the country, which has crippled our economy, public attitudes, and morals. The old system collapsed before the new one had time to begin working."

Moments later the red flag of the Soviet Union was lowered for the last time over the Kremlin and the tricolor of the Russian Federation was hoisted up the flagpole. But the Soviet Union had in fact ceased to be five days earlier—not in Moscow but in Kazakhstan.