Keep It Simple: Japan Shows How to Get Shipbuilding Right 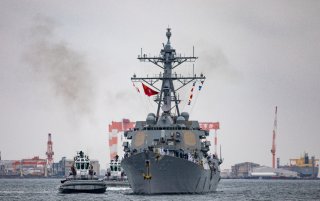 The Japanese Maritime Self Defense Force (JMSDF) fields a fleet of general-purpose destroyers, or DDs, which forms the backbone of the JMSDF’s surface fleet. The current DD fleet consists of nearly thirty ships and includes ships from the Asagiri, Murasame, Takanami, Akizuki, and Asahi classes. They are capable, solid platforms that deploy increasingly modern weapons and sensor platforms on stable hulls based on proven engineering concepts. A commercially competitive Japanese domestic shipbuilding industry and a cutting-edge, comprehensive engineering ecosystem built this fleet to form the core of a surface fleet only eclipsed by the U.S. Navy and the People’s Liberation Army Navy (PLAN). More impressively, the JMSDF accomplished this while only investing around 1 percent of its GDP into defense during the duration of the fleet’s buildup. How Japan accomplished this military-industrial feat is far beyond the scope of this article. However, naval leaders should understand and seek to learn from the incredibly sound engineering decision-making that built and deployed the JMSDF’s fleet of DDs.

The current fleet of DDs can be generally split into two generations of hulls. The first generation weighs around 4,000 tons and consists of the Hatsuyuki (recently retired) and Asagiri (currently being replaced) classes. Predominantly designed and built in the 1980s, they are helicopter-carrying warships that relied on box-launched missiles and guns for combat. They are similar in size and contemporaries to the RN Type-22 frigates and were designed for anti-submarine warfare and escort duties on the Cold War battlefield. While solidly designed, they are showing their age and are being expeditiously replaced with newer destroyers and the similarly sized modern Mogami-class frigates.

While the first-generation DDs were capable, the true marvel of sound naval engineering decisions began with the second-generation DDs, starting with the Murasame-class. The JMSDF aggressively implemented new naval technologies, such as a standardized vertical launching system (VLS)—a revolutionary concept in 1990—and grew the size of the hull to over 6,000 tons. While some radar cross section reducing measures were implemented, the JMSDF stuck to traditional designs and prioritized seakeeping. Japan also stuck to a conventional combined gas and gas power system and the license-produced Rolls Royce Spey and General Electric LM2500 turbine plants widely used in European and American warships. What the JMSDF achieved was a balance of technical progress and proven capabilities. It chased innovation in armaments with the VLS, stuck to proven and reliable engineering concepts in the hull and powerplant design, and increased the displacement. While the Murasame-class was not incredibly more capable than the preceding Asagiri-class, the Murasame-class’ increased size proved to be remarkably prescient in developing future classes of destroyers.

The ensuing destroyer classes reaped the benefits of the Murasame-class’ sturdy and roomy design. The following Takanami-class expanded its armaments by doubling the number of Mk 41 VLS missile cells and replacing the 76mm with a 127mm main gun. While these armaments increased the ships’ displacement slightly, the hull required little re-engineering. By 2009, the JMSDF combined the domestic AESA radar and FCS-3 combat system with the second-generation hull to create the Akizuki-class. Displacement was again increased, but the hull did not need to be significantly re-designed. This design was again refined and turned into the Asahi-class, emphasizing improving the destroyer’s anti-submarine capabilities and introducing a hybrid gas and electric propulsion system. The following illustration shows the JMSDF destroyers’ progress from the Asagiri to Asahi-classes. Note the hull’s similarities within the second generation, but also the incremental improvements that enabled a formidable twenty-first-century surface combatant (DD-120 JS Shiranui) to be built on the same hull as a venerable Cold Warrior designed in the 1980s. 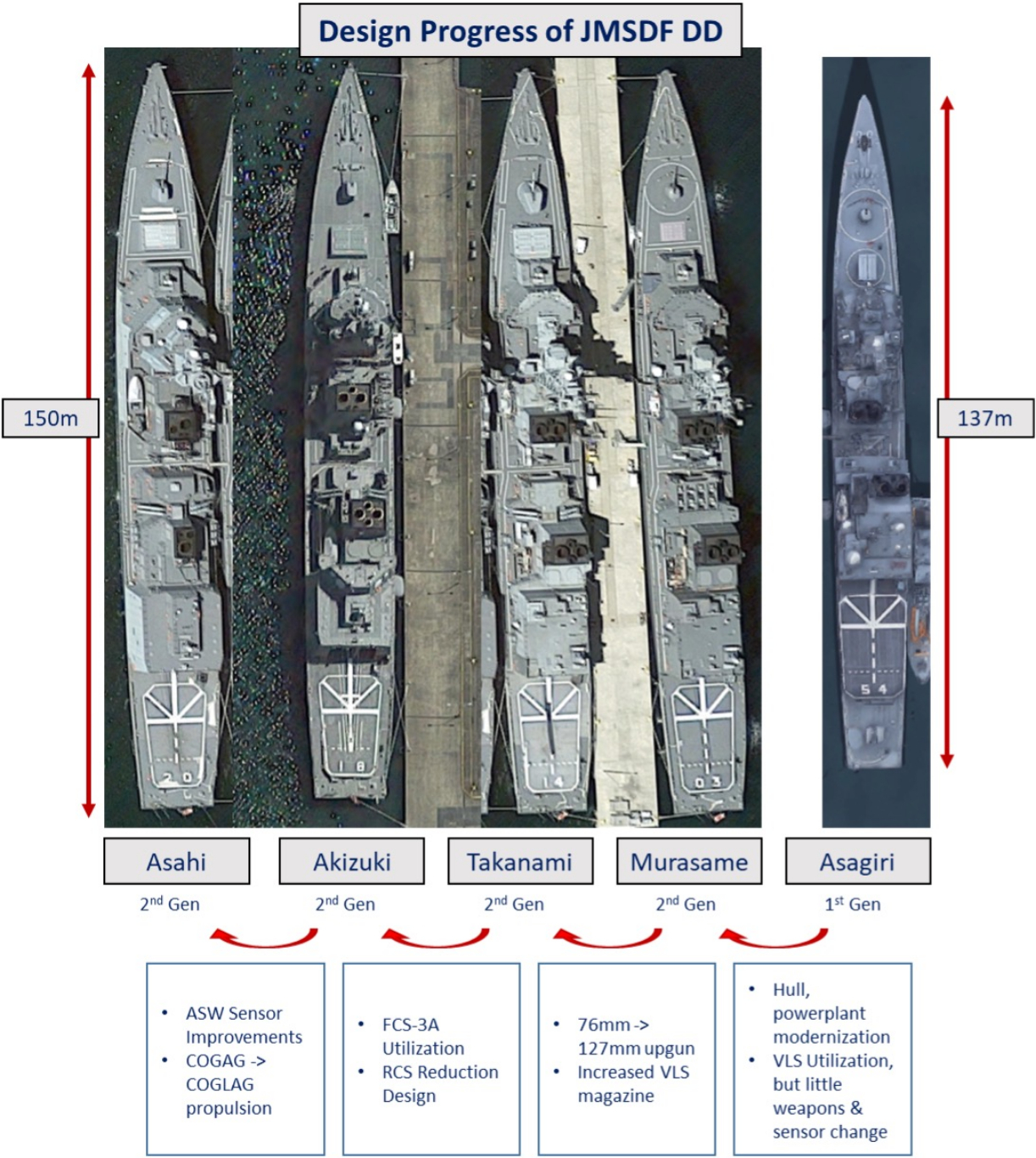 Following the completion of the Asahi-class destroyers, the focus turned to other important projects such as the Maya-class AEGIS destroyers, Mogami-class frigates, and the conversion of the Izumo-class into F-35B Lightning fighter jet carriers. It is reasonable to assess that Japan has completed building variants of its second-generation destroyers (consisting of twenty-one hulls). As the first Murasame-class destroyers start to reach thirty years of service, Japan may begin the process of procuring its third generation of general-purpose destroyers. If the JMSDF abides by the sound engineering decision-making process it demonstrated in building its second-generation destroyers, the third-generation destroyers will be formidable surface combatants and form the mainstay of the JMSDF’s surface combatant capabilities through the mid-twenty-first century.

What all navies, and especially the U.S. Navy, can learn from the JMSDF’s general purpose destroyer procurement is the importance of preventing design creep, delivering a well-engineered, reliable ship hull, and then adding a sizable (presumably 20 percent) future-proofing margin for future variants. While the JMSDF likely did not require a 6,000+ ton hull to fit the Murasame-class’s combat capabilities, it saved an enormous amount of resources by preventing a hull design overhaul as additional weapons and sensor systems were added in subsequent classes. With many new ship classes scheduled to enter service soon, the U.S. Navy must continually be reminded that great procurement programs are not born when the Navy attempts to squeeze an inordinate number of revolutionary technologies into one single program. Great naval programs, such as the Japanese multi-purpose destroyers, are born when naval leaders and engineers take measured technical risks and design for future growth.

Jeong Soo “Gary” Kim is an active-duty Civil Engineering Corps Officer in the U.S Navy. He is the winner of the 2021 Marine Corps Essay Contest hosted by the U.S Naval Institute and is published in Proceedings, Marine Corps Gazette, the National Interest and the Center for International Maritime Security (CIMSEC).