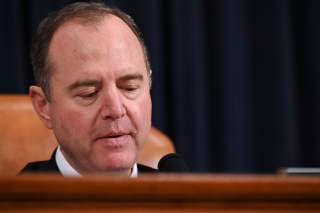 House Minority Leader Kevin McCarthy said Thursday that he believes that Rep. Adam Schiff has “lied numerous times” during his tenure as chairman of the House Intelligence Committee, including about his knowledge of the Trump whistleblower.

McCarthy accused Schiff — who he referred to repeatedly as “Adam Shift” — of lying throughout the Trump-Russia investigation, as well as during the impeachment inquiry.

“You just asserted, and several Republicans said this yesterday at the hearing, Adam Schiff either personally met with the whistleblower or knows the identity of the whistleblower, which he continues to deny,” a reporter asked. “Can you say it plainly — do you think he’s lying?”

MCCARTHY: “Yes. And, I don’t think it’s the first time”pic.twitter.com/IkR1nierOV

Schiff, the chairman of the House Intelligence Committee, emphatically denied during the first impeachment hearing Wednesday that he knew the identity of the whistleblower, or that he had personally met with the individual.

“I do not know the identity of the whistleblower, and I’m determined to make sure that identity is protected,” Schiff said in an exchange with Rep. Jim Jordan.

Schiff did acknowledge last month that he gave misleading statements about interactions between one of his aides and the whistleblower, who filed the Aug. 12 complaint that kicked off the Democrat-led impeachment inquiry.

The New York Times reported on Oct. 2 that the whistleblower met with an unidentified Schiff aide before filing a complaint against Trump with the Intelligence Community Inspector General. In multiple interviews leading up to the Sept. 26 release of the whistleblower complaint, Schiff indicated that he did not know anything about the whistleblower or the complaint.

In an MSNBC appearance on Sept. 17, Schiff said that “we have not spoken directly with the whistleblower.”

“We would love to talk directly with the whistleblower,” he added.

After the whistleblower complaint was published, Schiff indicated that he planned to have the CIA analyst speak to Congress. He has backed away from that plan, claiming that other witnesses deposed in the impeachment proceedings have corroborated the whistleblower’s allegations.

Rep. Devin Nunes, the top Republican on the intelligence committee, asked Schiff on Friday to testify in a deposition regarding any contacts with the whistleblower. The Democrat has not responded.

Schiff’s office did not immediately respond to a request for comment about McCarthy’s remarks.