The Key to Taiwan’s Defense? An American Forward Presence 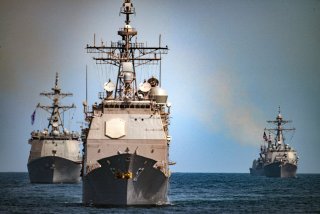 With tensions potentially higher than they have been in years, and Chinese planes and warships conducting war drills around Taiwan, a confrontation between China and the United States appears increasingly possible.

Could Chinese carriers in the Taiwan Strait or in striking distance of Japan successfully defend Taiwan from a joint U.S. and allied attack? While it’s only a hypothetical, it’s certainly a complex question worth considering. Chinese carriers and amphibious vessels might succeed in an amphibious assault to take over Taiwan if U.S. and allied forces could not get there in time or simply were not close enough to intervene in an impactful way.

However, should U.S., South Korean, or even Japanese forces have sufficient warning of an imminent invasion, U.S. and allied naval assets could be in close enough proximity to challenge or stop a Chinese takeover of Taiwan.

This may be a key reason why U.S. Pacific Command operates a large number of ships and assets in the region and regularly conducts forward operations, including training, combat preparation drills, and aircraft carrier launch operations. Forward presence could be the deciding factor in any hypothetical scenario involving an attack on Taiwan.

First, attacking Chinese forces would likely struggle to establish air superiority in support of an amphibious assault should U.S. carrier-launched F-35C fighters and amphibious-launched F-35Bs be within range of attack. Without clear air supremacy, an amphibious force would be extremely vulnerable to attack from U.S. or Japanese fifth-generation aircraft such as F-35s.

Another key variable likely to make a Chinese move on Taiwan very difficult is the potential presence of U.S. submarines. Virginia-class attack submarines are increasingly engineered with advanced sonar and quieting technologies such that they can approach high-risk areas less likely to be available to more easily detected surface ships. Hidden submarines can therefore perform clandestine reconnaissance missions in high-risk coastal areas. Should they remain undetected, U.S. Navy attack submarines could succeed in destroying attacking Chinese ships traveling to Taiwan.

If the United States chose to intervene, it would, of course, need air and maritime superiority to have any hope of thwarting the attack. An amphibious assault carrying large numbers of Chinese troops and heavy armor would most likely need to be destroyed from the air to prevent a fait accompli. Should allied air superiority be established quickly, then there may indeed be hope that a major invasion could be stopped before reaching the shores.

However, given that Taiwan is merely 100 miles off the Chinese coast, this may be a tall order. Moreover, it may simply be a question of time.