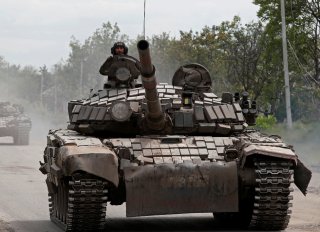 A top occupation official told Russian state media that Ukraine’s southeastern Kherson region will soon become part of Russia. "The Kherson region intends to accede to the Russian Federation in the near future, becoming its full-fledged constituent," claimed Kirill Stremousov, the deputy head of the Kherson region’s military-civilian administration.

Stremousov said earlier in May that Kherson will eventually join Russia, but that the timeline is farther off. "The timing of the preparation of the appeal has not yet been outlined. But it's not a matter of the next few days, but the foreseeable future,” he said. The Moscow-appointed governor of Kherson, Volodymyr Saldo, previously echoed Stremousov’s statements, telling reporters that the region “will soon become part” of the Russian Federation. “We are looking at the Russian Federation as our own country because it is under the control of the [Russian] Armed Forces and later will be transformed into a federal subject,” Saldo said.

Moscow has not taken a firm official stance on the fate of the Kherson region, with Kremlin spokesman Dmitry Peskov saying on May 11 that the status of Kherson is up to its residents to decide. Ukrainian authorities warned early in the war that Russia was plotting a referendum to create a “Kherson People’s Republic” in line with the breakaway pro-Russian Donetsk and Luhansk People’s Republics to the country’s east, but there remains no evidence that the Kremlin is planning anything along these lines. Local pro-Russian officials in Kherson appear to prefer their formal absorption into Russia over a possible proxy state arrangement.

Reuters reported earlier this week that Kherson has begun to export last year’s grain harvest to Russia. "We have space to store [the new crop] although we have a lot of grain here. People are now partially taking it out, having agreed with those who buy it from the Russian side," Stremousov said, adding that the Kherson administration is working on supplying sunflower seeds to local and Russian processing plants.

The southeastern Kherson region was captured by Russian forces in the opening stages of the Russo-Ukrainian War. Control over Kherson further insulates the Crimean peninsula—annexed by Russia in 2014—from Ukrainian offensives and provides Russian forces with a staging point to strike out in the direction of the strategically-situated southern city of Mykolaiv. Control over Mykolaiv would put the Russian military in the position to threaten the vital southwestern port hub of Odessa, which is widely regarded as one of the war’s biggest prizes.