Kill the Stealth: This Might Be a Way to Shoot Down an F-22 Raptor 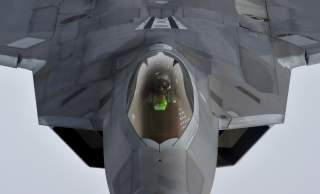 It’s only close in during a visual range dogfight where high off-boresight missiles and luck might afford them a chance. But while China can afford to lose dozens of cheap J-10s, we only have 143 operational Raptors.

The U.S. Air Force has as a tiny fleet of 186 Lockheed Martin F-22 Raptor stealth fighters. That’s all that survived out of 187 production aircraft (195 jets if developmental airframes are included) that were built out of the 750 that were originally planned. Of those 186 remaining Raptors, only 123 are “combat-coded” aircraft with another twenty that are classified as backup aircraft inventory machines. The rest are test and training assets.

But even if 186 aircraft remain in the Air Force’s inventory—not all of those fighters are operational. At least two—possibly more—jets are not currently flyable. One test aircraft—tail 91-4006—at Edward Air Force Base (AFB) in California has avionics that are so old; it’s not worth bothering to fly it anymore. Another aircraft—02-4037—was badly damaged in a belly landing at Tyndall AFB, Fla. It’s going to take at least four years and $98 million to repair the damage. The Air Force has also had trouble with repairing other F-22s due to snafus with retrieving improperly stored production tooling for the jet.

(This first appeared in October 2015 and is being republished due to reader interest.)

The bottom line is that the Air Force has well less than the 381 Raptors that it needs. While the F-22 is overwhelmingly qualitatively superior to any other fighter flying, it can’t be everywhere at once. The Air Force currently has only six operational F-22 Raptor squadrons—all of those are understrength compared to a normal fighter unit. A normal fighter unit flying F-15s or F-16s will usually have twenty-four primary authorized aircraft (PAA) and two backup aircraft inventory (BAI) jets—that’s the most efficient way to run a squadron according to Air Force officials.

Five of the six operational Raptor squadrons have twenty-one aircraft plus two BAI machines. The Air National Guard’s sole Raptor squadron based at Hickam AFB, Hawaii, only has a total of twenty jets—two of which are backup inventory planes—or in other words, it’s severely understrength. But to field even that paltry force, the Air Force had to cut its test and training force to the bone—so much so that the elite pilots at the Air Force Weapons School at Nellis AFB, Nev., have to share their thirteen F-22s with their operational test community brethren across the ramp at the 53d Test and Evaluation Group. That means the two Nellis squadrons are sharing half-a-squadron worth of planes amongst them.

To make matters worse—as money is siphoned off to pay for the F-35—upgrades to keep the Raptor at the top of its game have been short changed. The Raptor won’t have full integration with the latest air-to-air missiles like the AIM-9X Sidewinder and AIM-120D AMRAAM until late in 2017—more than a decade after the jet became operational in 2005. Nor will the Raptor receive a helmet-mounted cueing system—which would allow it to take full advantage of the AIM-9X—until 2020 at the earliest. The original plan was to field the Raptor with a helmet-mounted cueing system on Day One—but a combination of a lack of funding and technical problems torpedoed that plan.

But even without those upgrades, the Raptor is by far the most capable air superiority fighter flying anywhere. In any given scenario where a four-ship of F-22s goes up against an “enemy” force during large force exercises, those jets generate lopsided kill ratios. During initial operational testing, the “Red” forces went for months without taking a single shot at the Raptor. That hasn’t changed much in the intervening decade—but a fundamental problem remains.

There are not enough Raptors and they don’t carry enough missiles. For example, it’s fairly routine for four Raptors to take on more than twenty Red aircraft during training exercises. Moreover, those Raptors help fourth-generation fighters like the F-15 to engage their targets—but the frequent complaint from both Raptor along with F-15 and F-16 pilots is that they run out of missiles very, very quickly. That’s especially true with the advent of digital radio frequency memory jamming that wrecks havoc on the AIM-120 and even the active electronically scanned array (AESA) radars found on America’s best fighters.

“We—the U.S. [Department of Defense]—haven’t been pursuing appropriate methods to counter EA [electronic attack] for years,” a senior Air Force official with extensive experience on the F-22 told me last year. “So, while we are stealthy, we will have a hard time working our way through the EA to target [an enemy aircraft such as a Russian-built Sukhoi] Su-35s and our missiles will have a hard time killing them.” Another Raptor pilot concurred: “While exact Pk [probability of kill] numbers are classified, let’s just say that I won’t be killing these guys one for one.”

That effectively means that America’s small force of F-22s and few upgraded F-15C “Golden Eagles” could be overwhelmed by even cheap and individually less capable machines like the Chinese Chengdu J-10. While the F-22 force could slaughter hordes of Chinese J-10s in a battle with relatives ease, eventually the U.S. aircraft would be overwhelmed as they run out of missiles—especially if they are not killing those enemy aircraft one-for-one with their missiles. The Chinese—like the Russians—have formidable electronic attack capabilities including DRFM jammers.

Really, the only chance aircraft like the J-10 stands against the Raptor is to overwhelm the U.S. military with numbers. Basically, the Chinese would have to hope that jamming would allow some of their aircraft to ride out the onslaught of AMRAAMs raining down on them while they close to visual range. It’s only close in during a visual range dogfight where high off-boresight missiles and luck might afford them a chance. But while China can afford to lose dozens of cheap J-10s, we only have 143 operational Raptors. It’s a strategy that worked for the Soviet Union during the Second World War; it could certainly work for China.