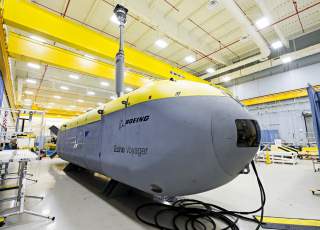 Key point: Drones are cheap and can be mass-produced, allowing the Pentagon to get more bang for taxpayers’ bucks.

The Navy is in a position to create a concrete definition of what swarms of unmanned vehicles (UxVs) can do for the future of mine countermeasures (MCM). Some advantages are ready to be applied while others are still on the horizon. The Naval Surface Warfare Center, Panama City Division has invested in the development of swarming-based technologies for MCM and has developed swarming algorithms that allow otherwise standalone systems to collaborate by dividing up tasks, such as surveying potential minefields, and many of these algorithms are specifically designed to optimize the division of labor. Those optimizations are only the tip of the iceberg for what can be done to improve future naval MCM capabilities. The Navy of the future might have:

By exploiting swarm-based technologies, there is potential for the Navy to shape MCM for a generation. However, in order to take full advantage of swarming capabilities, three significant shifts in how we think about MCM are required.

Economy of scale is perhaps the most immediate opportunity for naval MCM development. Existing MCM systems are typically single, large systems that tend to be costly to develop and deploy. We suggest that moving to swarming-based technologies will allow a shift from single, large MCM systems to multiple, lower cost, swarming-based, modular systems. Current naval MCM systems yield significant capabilities and are superior not only in their design, but in their ability to detect mines. A single MCM system, however, can only be in one place at one time. Furthermore, limited resources reduce the overall availability of MCM systems thereby limiting our ability to conduct missions.

Developing large numbers of inexpensive MCM units, designed to work collaboratively in swarms, is one way to advance MCM capabilities. Simply by virtue of their numbers, swarming units provide increased flexibility when dealing with logistical and operational challenges. Swarms can be combined, or subdivided, depending on the strength required. When deciding how much MCM capability to assign to a region, commanders would be able to choose from multiple options. Cost reduction may open up new strategic options. Inexpensive swarm units are expendable and this allows the Navy to build swarming MCM systems designed not to only detect mines but to also trigger them in efforts to speed the process of mine clearance while being able to accept more risk. With a swarm specifically designed to detect and trigger mines, some of the existing problems we face in mine detection become irrelevant. Certainly, some members of the swarm might be lost to an explosion, but fewer than one might think. Most of the individual swarming units would be scattered but intact, so the remaining swarm agents could simply regroup and continue their work.

Once we consider the paradigm shift of more units for less money, we need to consider how that shift will affect our design of future MCM capabilities.

Swarm-based MCM designs need to focus on modularity: separating the work into individual components, according to their design and how they will be used. Modular systems are easy to test and upgrade, and when they do break, they are much easier to diagnose and repair. In a modular swarm, individual UxVs are specialized. They perform the fewest tasks necessary, because they can count on their nearby teammates to complete the mission.

A modular approach allows for the creation of highly specialized MCM units. For example, consider the problem of detection. Different types of mines require different, specialized detection approaches, so if commanders know what type of mines might be present, they can deploy swarming sensing units optimized for those detections. If the mines are buried, even more specialized approaches are typically required. Similar trees of specialization and sub-specialization can be constructed for problems of identification and neutralization.

With a single system, all of the parts are designed to work together. Components are judged and chosen based on how they impact the system as a whole. To be effective, swarms need similar consideration. This brings us to the next point.

Acquisitions that take a single-system approach have a tendency to stovepipe development and while this has been successful, we are suggesting a different approach. Current systems are often tested and evaluated in isolation, without consideration for how the might interact with other systems. A swarm is, by definition, a large group collaborating toward some goal. A swarm-based approach to acquisition will measure the success of a program by its effectiveness in groups, particularly groups composed of a variety of different UxVs.

Specifically, the Navy could test and evaluate how a new product works when applied to swarm-based scenarios. It should offer incentives for the use of multiple kinds of agents, particularly those designed by outside groups. (Increased collaboration between diverse research teams is one side-effect of this approach.) The Navy might also consider developing standard scenarios for swarm-based MCM, both to direct innovation and to offer a concrete basis for measuring success.

Above and beyond standardizing scenarios, the Navy is poised to take the lead in defining what swarm-based MCM means. This would require investments in several important swarm-enabling technologies, such as:

To achieve successful swarm-based MCM, the Navy will need to develop a mindset around large groups of swarming technologies that are low cost and, perhaps, expendable. The human mind is hard-wired to think in terms of action by individuals, or possibly small groups. Yet this is not the only option. In nature, everywhere we look, we see large groups of creatures that cooperate with each other to complete sophisticated tasks. For some problems, such as search and detection, their methods are far superior to our own. We suggest mimicking nature to develop a swarm-based approach with the ultimate goal being the development of advanced MCM capabilities.

Dr. Joseph Walsh received his doctorate degree in Mathematics from the Georgia Institute of Technology in 2017. His dissertation is in the area of optimal control and his research has been applied to heterogeneous teams of vehicles. He has published numerous papers in multi-agent coordination. He is currently the head of the Applied Sensing and Processing Branch at the Naval Surface Warfare Center, Panama City Division.