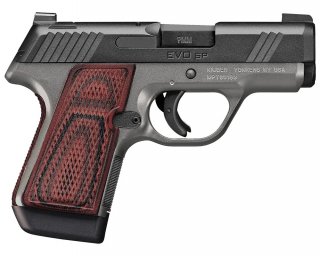 Kimber made a sub-compact outing not too long ago. Long story short, it didn’t go well. The Solo did poorly in performance and lacked the qualities of a solid carry pistol. It was unwieldy and would only really cycle top-tier ammo. Now, Kimber is taking another swing at the concealed carry game with the Evo SP line of pistols. Do they stack up to similar handguns? Read on to find out.

I was really disappointed with the Kimber Solo. It was lacking for a pistol designed for carrying. In turn, I was pretty hesitant to give this model a shot, but I walked away feeling like Kimber was really able to redeem itself.

To start off, the Evo SP is a really beautiful gun as we’ve come to expect from Kimber over the years. I typically don’t go for two-tone guns, but the black slide and grips against the steel frame were appealing to me this time around.

There are also two sets of slide serrations at the front and back, an aspect that wasn’t present on the Kimber Solo. It looks good and lets me get a good purchase when racking my handgun.

The magazine also comes stock with an extension that increases the grip length by about half an inch. This is great for big hands, but some might not love this addition since the magazine extensions do make the concealability factor just a little bit worse.

Included are two 7 round mags, which is pretty decent for a subcompact and really minimizes size. I personally prefer to carry a firearm with a larger capacity though. My everyday carry tends to favor compact pistols so I can have decent concealability and a solid mag capacity. Still, the Kimber SP Evo won’t be sitting in my gun safe.

You’ll also find that this isn’t a run-of-the-mill polymer-framed handgun either. It’s full metal, including the trigger assembly. The pull and break on this pistol’s trigger are clean. It probably has one of the best triggers I’ve pulled in a while.

The SP Evo also has TruGlo tritium night sights, not bad at all for a pistol, though I usually end up throwing an RMR (and a flashlight) on many of my concealed firearms.

The size is predictably unassuming with a length of just a hair over 6 inches, a little longer than a modern cell phone. It’s also slim with a width of 1.2 inches as well as pretty squat at 4.5 inches high. It’s easily concealable.

Like many other Kimber products, it has all the bells and whistles and feels “refined.” They for sure redeemed themselves this time around. It’ll serve you well if you choose to drop a pretty penny on it.