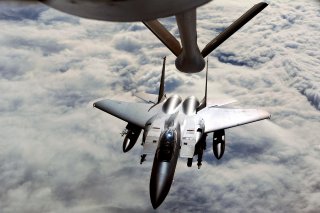 After a large army, the second most important arm of the Republic of Korea Armed Forces has historically been the country’s air force.

The Republic of Korea Air Force (ROKAF) is the most powerful air force on the Korean Peninsula, with a capability far greater than its northern rival, providing air cover and support to ground forces defending south of the thirty-eighth parallel. Recently, the air force has taken on a new task as Seoul shapes a conventional force to deter North Korea’s nuclear weapons.

South Korea had little to no air force to speak of during the Korean War, but afterward the country was trained and equipped to a high standard. In any North/South rematch the ROKAF could count on facing off against a Korean People’s Army Air Force trained by North Korea’s patrons, equipped with some of the latest communist bloc fighter jets. As part of the postwar air force building process the ROKAF was injected with 122 F-86 and RF-86 Sabre jets, the same flown by American pilots during the war.

This first appeared in September 2017.

The rapid growth of the South Korean economy meant newer, larger fleets of fighters could afforded on a regular basis. The F-86 fleet gave way to the F-5A/B Freedom Fighter jets in 1965. Developed for the export market by Northrop and widely adopted by America’s allies from Norway to the Philippines, the F-5 was the F-16 (or MiG-21) of its time, a A total of 214 F-5s, including a home-built version, were introduced to the air force up until 1986.

In the late 1960s, South Korea began expanding its fighter fleet into twin-engine jets with the purchase of second-hand F-4D Phantom II fighters. The ROKAF traded away thirty-six F-5A/B jets for eighteen F-4Ds, and eventually acquired ninety-two F-4Ds. Some of these aircraft were brought up to the -E standard, which combined with second-hand -E planes from U.S. Air Force brought the country’s F-4E total to 103. The Phantom II was also the first South Korean aircraft to have precision attack capabilities: the F-4D was equipped with Pave Spike day attack and the F-4E with Pave Tack day/night attack laser targeting pods. Thirty six F-4Es were modified to carry the Israeli Popeye precision-guided missile.

Today, the ROKAF consists of sixty-one F-15K “Slam Eagle” fighters and 169 F-16C/D Fighting Falcon fighters, along with 158 F-5s and seventy-one F-4 jets. T-50 jets, developed by Korean Aerospace Industries (KAI) and Lockheed Martin, are being built for ground attack and jet trainer roles. The ROKAF also has forty F-35A Joint Strike Fighters on order, and may order even more.

The F-15K “Slam Eagle” is a descendant of the U.S. Air Force’s multi-role F-15E “Strike Eagle”, and is capable of both air-to-air and air-to-ground missions. The F-15K has a number of enhancements over the F-15E: the F-15K has an AN/APG-63 (V)1 Active Electronically Scanned Array (AESA) radar, infra-red search and track capability, a helmet-mounted cueing system, and like the F-16 carries the AIM-120 AMRAAM medium range air to air missile and Sidewinder short range missiles. It can also carry the SLAM-ER precision attack missile, descended from the Harpoon anti-ship missile. The latest, newest munition carried by the F-15K is the Taurus KEDP-350K cruise missile. The German-made missile has a penetrating warhead for striking hardened targets and is a key part of South Korea’s Kill Chain and Korea Massive Punishment and Deterrence contingency plans for dealing with the North in a crisis. The Taurus has a range of 310 miles, giving it the ability to strike most of North Korea, including Pyongyang, while fired south of the DMZ. The ROKAF has between 170 and 180 missiles on order.

In addition to fighters, South Korea has steadily built up its fleet of support aircraft. Four “Peace Eye” aircraft—converted Boeing 737s—provide the country with its first airborne early warning aircraft capability. Peace Eye is equipped with the Northrop Grumman Mechanically Scanned Array radar system, which can detect aerial targets at two hundred miles and small boats at 150 miles. The country has a requirement for two more planes. The ROKAF also has eight Raytheon Hawker 800XP spy aircraft that can take pictures of installations up to fifty miles from the DMZ while also performing signals intelligence collection tasks. The service also has an impressive fleet of CH-47 Chinook, S-70, and S-92 helicopters for combat search and rescue missions. The close nature of the threat means South Korea has no aerial refueling tankers in its inventory.

South Korea, in partnership with Indonesia, is also developing its first indigenous fighter aircraft. Known as KFX, the fighter will be a “4.5 generation fighter”—halfway between 4th generation planes such as the F-16C and new ones like the F-35A. Indeed, mockups of the KFX resemble both planes. KFX will be a multi-role aircraft capable of performing both jet fighter and attack duties. South Korea plans to build at least 120 of the planes to replace older F-4 and F-5 aircraft. Initial operating capability was rather optimistically set for 2020, but the aircraft will only hit the design phase in 2018, making 2025 (or later) a more goal.

Finally, the ROKAF is set to acquire four RQ-4 Global Hawk high-altitude long-endurance drones. The Global Hawk drones are a key plank of a sensor network set to watch North Korea for advance warning of missile launches. The sale was approved by the Department of Defense in December 2014 with deliveries set for 2018.

The Republic of Korea Air Force is well positioned to counter its primary—and only—adversary, North Korea. While the North’s Korean People’s Air Force has withered under decades of economic stagnation the ROKAF has thrived, blossoming into a balanced, modern air force. The ROKAF can handily perform the full spectrum of missions it could be assigned in a second Korean War, from close air support to performing decapitation strikes against the North Korean leadership. It is a powerful, credible conventional deterrent to war.