Is Kirstjen Nielsen Back in the Trump Administration? 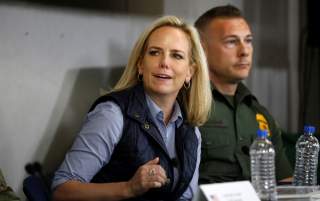 Kirstjen Nielsen was appointed to rejoin the Trump administration, marking her return since she stepped down as secretary of the Department of Homeland Security six months prior.

The White House announced Wednesday that President Donald Trump appointed Nielsen to the National Infrastructure Advisory Council (NIAC). Members of NIAC, which is an entity of the Homeland Security Department, advises the administration on how to manage and improve risks to the country’s infrastructure sectors.

Nielsen will be one of up to 30 executive, private industry, and other local and state government leaders who serve on the council.

The announcement marks Nielsen’s return to the White House since she stepped down as the Homeland Security chief in April, part of a sweeping shakeup of the department and its agencies at the time.

However, her tenure as DHS chief came at a time of immense crisis at the U.S southern border. From January to May 2019, for example, apprehensions at the border increased every month, prompting Trump to grow frustrated over the lack of progress to control illegal immigration. By the time Nielsen resigned in April, there were well over 100,000 apprehensions and inadmissibles at the U.S.-Mexico border in that month alone.

A month after her resignation, the number of illegal aliens detained or turned away at the border surpassed 144,000, a peak for fiscal year 2019 and the highest volume experienced in over a decade.

In her place, Trump tapped then-Customs and Border Protection Commissioner Kevin McAleenan, who remains the acting director of Homeland Security to this day. Monthly border apprehensions have declined dramatically since McAleenan took the helm, with September’s numbers declining to around 52,000 law enforcement actions.