Kyiv Redux? Ukraine Is Pushing Russia Back From the Strategic City of Kharkiv 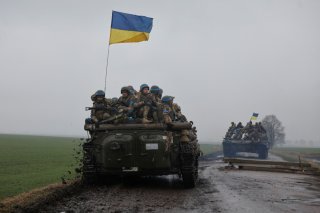 Senior Pentagon officials are highlighting a less recognized but extremely significant element of Russia’s many challenges and failures in Ukraine.

Attacking forces, for instance, have not been able to secure the critical city of Kharkiv, a strategically important city just northwest of the Donbas region. While seemingly less prominent, Kharkiv is crucial due to its proximity to both Russia and the Donbas, meaning that capturing it could provide Russian forces with a continuous, safer supply line from Russia directly into the Donbas. However, Russian attacks on Kharkiv have not been successful.

“[Kharkiv] has continued to come under air assault largely through strikes for sure, but the Ukrainians have been doing an able job over the last 24/48 hours of pushing the Russians further away, and they have managed to push the Russians out about 40 kilometers to the east of Kharkiv,” a senior Pentagon official told reporters on Monday.

The Pentagon official did not elaborate on why the Russians have been unable to advance on the city, but it is quite likely that the Ukrainians are continuing to build on the effective tactics that they used near Kyiv. Those tactics included anti-armor ambushes at strategically critical crossroads and chokepoints. Anti-armor weapons such as Javelin anti-tank missiles continue to prove extremely effective against Russian armored vehicles, Pentagon and White House officials said.

“Kharkiv's important to the Russians because it sits at the very northwestern sort of lip and edge of that Donbas region, and as they wanted to, you know, they were obviously hoping to get Kharkiv and hold it so that they could have that ability to continue to push down from the north, and the Ukrainians are making it difficult for them to do that,” the senior Pentagon official said.

“They're pushing them back, so back into areas of the northern Donbas region, but away from Kharkiv, so an incredible effort there that, again, hasn't gotten a lot of headlines and hasn't gotten a lot of attention, but it's just another piece of the stiff Ukrainian resistance that they continue to demonstrate,” the official added.

Major urban areas like Kyiv or Kharkiv are typically accessed through roads, bridges, and other chokepoints that are vulnerable to Ukrainian anti-tank missile attacks and ambushes.