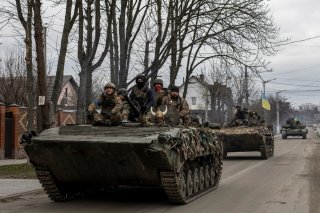 Roughly 9,000 Ukrainian soldiers have died in the fight against Russia’s invasion over the past six months, a Ukrainian general announced on Monday—a rare admission of Ukraine’s internal estimate of casualty figures during the war, which have largely been kept private.

Gen. Valeriy Zaluzhny, the commander-in-chief of the Ukrainian armed forces, announced the casualty figure at a press conference on Monday while appealing for the care of Ukrainian veterans and children who had been left stranded or orphaned by the conflict.

“They really do not understand anything that is going on and definitely need protection,” Zaluzhny said, referring to the children of Ukrainian soldiers. “Their fathers have gone to the front and are maybe among the nearly 9,000 heroes who have been killed.”

It was not immediately clear where Zaluzhny’s number came from, or whether it included casualties among peripheral branches of the country’s security forces, such as border guards. It is also unclear what impact Ukraine’s losses have had on its ability to carry out further military operations, as the precise number and disposition of Ukrainian forces remains a closely-guarded secret.

Although the Ukrainian estimate of its own casualties likely understates the figure, it is vastly lower than Russian and Russian-allied estimates of Ukrainian losses. The Donetsk People’s Republic (DPR), a pro-Russian separatist proto-state in eastern Ukraine, has publicly claimed that as many as 150,000-200,000 Ukrainian soldiers had been killed or wounded in the fighting, although this number is highly suspect and the DPR representative who provided it did not offer any supporting evidence.

Zaluzhny’s estimate comes out two weeks after a similar assessment by U.S. military officials on Russian battlefield losses, in which they speculated that between 70,000 and 80,000 Russian soldiers had been killed, wounded, or captured during the fighting. Ukraine’s Defense Ministry, which keeps a daily toll of approximate Russian losses in manpower, estimated in late August that Russian forces had suffered roughly 45,000 fatalities, as well as thousands of tanks, aircraft, and other combat vehicles.

The United Nations has reported that around 6,000 civilians have been killed during the invasion, and an additional 8,000 wounded—two numbers based only on confirmed cases and likely to be a vast underestimation of the true number.