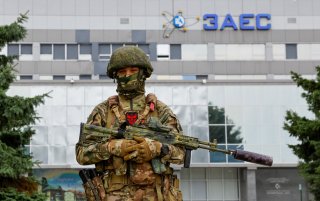 Russia will not be able to keep control of the Zaporizhzhia Nuclear Power Plant (NPP), a top Kyiv official said on Monday.

“The Russian military will retreat from Zaporizhzhia NPP, as their line of defense is being gradually pushed away towards the borders of Russia. When Russia seized Crimea, all the international representative offices gave up and said: ‘Well, okay.’ Now, such a story won’t cut it,” Ukrainian presidential advisor Mikhailo Podolyak told Ukrainian news outlet FREEDOM TV.

Petro Kotin, head of state-owned Ukrainian energy company Energoatom, suggested on Sunday that there are signs Russian forces may be preparing to withdraw from the facility. “In recent weeks we are effectively receiving information that signs have appeared that they are possibly preparing to leave the (plant),” he said on Ukrainian television, according to Reuters. “One gets the impression they’re packing their bags and stealing everything they can.” Kotin did not elaborate on which signs are pointing to Russia’s possible withdrawal from the plant.

Russian forces seized the Zaporizhzhia NPP, located near the city of Enerhodar in the southeastern Zaporizhzhia region, in the opening months of the Russo-Ukrainian War. In September, the Kremlin announced the annexation of Zaporizhzhia along with three other Ukrainian regions. The facility has reportedly been controlled by Russian nuclear energy giant Rosatom since March.

Russia and Ukraine have traded accusations over continued reports of shelling attacks against the NPP, sparking fears among observers that continued fighting around the plant could lead to a nuclear disaster.

International Atomic Energy Agency (IAEA) director general Rafael Grossi has called for the establishment of a “protection zone” around the plant. Grossi, who previously lamented that progress in talks over establishing the safety zone has been “slow,” met with Rosatom General Director Aelexey Likhachev in Istanbul last week. “IAEA Director General @rafaelmgrossi met a Russian delegation led by Rosatom DG Alexey Likhachev in Istanbul today, for consultations on operational aspects related to safety at #Zaporizhzhya NPP in Ukraine & on urgently establishing a nuclear safety & security protection zone,” the IAEA tweeted, according to Reuters.

The Kremlin has so far shown no indication that it intends to relinquish control over the plant. Pro-Moscow occupation authorities in Enerhodar denied Kyiv’s assertions of a possible Russian withdrawal, insisting that “this information does not correspond to reality” and that the Zaporizhzhia NPP “remains under Russian control,” according to CNN.

Likhachev reiterated Russia’s terms for the establishment of a protection zone following his meeting with Grossi. “Once again, I would like to proclaim the principle. Not a single bullet, not a single artillery shell, not a single rocket, and not a single group of saboteurs should be allowed to approach the power plant’s premises,” he said, as cited by Russian state news outlet TASS. In return, “Russia will agree to keep no offensive weapons or strike forces [at the power plant], but will use only the power plant’s own means of physical protection and security. We are ready for this scenario. We hope the IAEA leadership hears us,” Likhachev added.