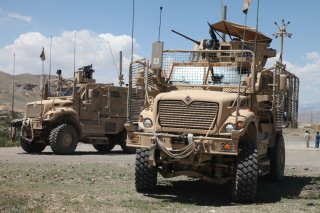 The Biden administration’s latest military aid package to Ukraine includes forty MaxxPro MRAPs. These blast-deflecting vehicles were used in large numbers during the ground wars in Iraq and Afghanistan. Thousands of MRAPS were mass-produced and fast-tracked to the theater to counter a fast-growing, lethal, and devastating IED threat posed by insurgents in Iraq and Taliban fighters in Afghanistan.

MRAPS are engineered with a protected “capsule” and an underneath “V” shaped hull raised off the ground to deflect bomb debris and fragmentation to the sides. MRAPs are built so that the wheels may come off and the vehicle may fall apart, but the core protective capsule will remain intact to keep soldiers safe. After demonstrating an ability to save lives in Afghanistan in 2002, a thirty-three-ton Buffalo MRAP vehicle made by Force Protection inspired Pentagon leaders to quickly mass-produce the vehicles given the scope and seriousness of the IED threat. As the war in Iraq evolved, IED threats became more sophisticated and impervious to jamming. Insurgents evolved from using garage door openers to detonate IEDs to planting elaborate multi-frequency cell-phone-detonated explosives able to destroy armored vehicles. Thousands of U.S. soldiers and marines were killed and thousands more were injured. Many suffered catastrophic losses of limbs and became amputees.

However, once MRAPs arrived on a larger scale, which included Pentagon efforts to buy, produce and deliver thousands of Navistar-built MaxxPro Dash vehicles, death rates from IEDs declined dramatically. Thousands of soldiers riding in MRAPs survived IED attacks and were better positioned to complete attack, ambush, and rescue missions.

A Pentagon news report on the latest drawdown says the package includes “Mine Resistant Ambush Protected vehicles…with mine rollers that will allow Ukraine to neutralize areas heavily mined  by Russia in the south and east.”

Following the large-scale and lengthy counter-insurgency wars in Iraq and Afghanistan, many questioned whether MRAP vehicles would become obsolete. However, others were inclined to think that the IED threat to armored combat vehicles would not disappear from future conflicts. Certainly, counter-insurgency and counter-terrorism threats will endure, and various kinds of ground-blasted or detonated explosives are used in conflict zones around the world.

This includes Ukraine where forces defending against the ongoing Russian invasion are endangered by mines that threaten tactical and combat vehicles seeking to maneuver into position across Ukrainian terrain. Ukrainian forces appear to have had some success thwarting, stalling, or even destroying Russian advances in the eastern Donbass region. MRAPs could help Ukrainian forces advance across areas previously held by Russian forces by clearing minefields and finding routes for safe passage for Ukrainian infantry and vehicles to advance.