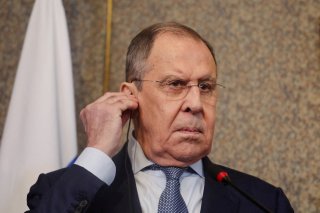 Russian foreign minister Sergey Lavrov announced on Sunday that the Kremlin supported the overthrow of Ukrainian president Volodymyr Zelensky—a sharp contradiction from earlier remarks by other Russian officials, who had expressed more limited views on the aim of the conflict.

“We will definitely help the Ukrainian people to free themselves from the [Zelensky] regime,” Lavrov said during a visit to Cairo, Egypt on Sunday, adding that the Ukrainian government was “absolutely anti-people and anti-history.” The foreign minister expressed his hope that Russians and Ukrainians would be able to “live together” without political friction in the future.

Lavrov’s remarks mark the most recent change in Russia’s stance on the conflict in Ukraine—a conflict that it has gone to great lengths to characterize as a limited “special military operation” rather than a war. Although Russian leader Vladimir Putin proclaimed in the days leading up to the invasion that Ukraine was not a “legitimate” state and had always been a part of Russia, the Kremlin initially maintained that it intended to “demilitarize and denazify” the country rather than overthrow the government in Kyiv. Following strong Ukrainian resistance and Russian logistical failures, the Kremlin further amended its position and its strategy, emphasizing the protection of the Donetsk People’s Republic (DNR) and Luhansk People’s Republic (LNR), the two pro-Russian secessionist proto-states in Ukraine’s eastern Donbass region, as the cause for the war.

The Russian foreign minister’s statements in Cairo also contradicted his position in April, when he claimed that the Kremlin had “no plans to change the regime in Kyiv” in remarks to the India Today television channel. At the time, Lavrov claimed that Ukrainians alone would decide what government they preferred.

Last week, Lavrov also claimed that Russia intended to protect the right of other Russian-occupied regions in Ukraine, notably the southern Kherson region, to secede from the central government in Kyiv, and warned that the Russian military would continue to occupy territories outside of the Donbass region, where most of the ongoing fighting has taken place. In preparation for a potential annexation, the Russian government also announced that it would fast-track applications for Russian citizenship within its occupied territories in Ukraine, waiving traditional requirements such as a Russian language test and a credit check—a step that led Ukrainian officials to accuse the Kremlin of attempting to undermine Ukraine’s sovereignty and lay the groundwork for future annexation.