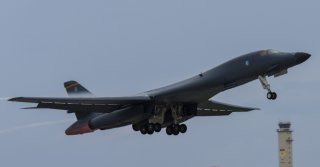 The United States Air Force cannot further reduce its fleet of B-1B Lancer bombers, at least not until the B-21 Raider arrives. Lawmakers in Washington made that point crystal clear last week when the House of Representatives passed a compromise defense policy bill that is part of the 2022 National Defense Authorization Act (NDAA), which will next go to the U.S. Senate.

While the House version actually contained no provision, a Senate amendment did contain a provision (sec. 149), which would prohibit further reductions in B-1 bombers until such time as the B-21 aircraft begins fielding. The prohibition would last until the end of September 2023. Additionally, the NDAA would prevent the Air Force from cutting personnel from units that operate or maintain B-1s, if such reductions would hurt the squadron's capability.

The Rockwell B-1 bomber was developed in the 1970s, while the B-1B variant was produced from 1983-1988. Designed with three internal weapons bays with an internal payload of seventy-five thousand pounds, as well as with a movable bulkhead and usable external hardpoints for its original nuclear mission, the bomber was originally designed to carry nuclear weapons.

The maximum external weapons payload could enable the supersonic variable-sweep wing, heavy bomber to carry an additional fifty-nine thousand pounds. However, the United States shifted the aircraft's mission to conventional weapons in 1994. That physical conversion to conventional-only armaments started in 2007 with the Strategic Arms Reduction Treaty (START), and the modifications were completed in 2011.

After decades of heavy operational deployments in the Middle East, the B-1 fleet is in rough shape, and as a result, the Air Force retired seventeen of the oldest and most worn-out Lancers this year in an effort to allow its maintainers to focus on keeping the remaining forty-five bombers operating. Most of those retiring B-1s, including the first in February and the last in September, flew to the Boneyard at Davis-Monthan Air Force Base in Arizona.

Despite the fact that the aircraft's days are numbered, the B-1B Lancers have been steadily upgraded in recent years. That included an eight-year-long effort to install the Integrated Battle Station (IBS), the largest and most complicated modification performed to date on the aircraft. Completed last year, it gave the flight deck a completely new look, and the IBS was developed as three separate modifications that included a Fully Integrated Data Link, Vertical Situational Display Unit, and Central Integrated Test System.

All of the remaining forty-five B-1s, as well as the twenty Northrop Grumman B-2 Spirit bombers, are expected to be retired in the next decade. That would leave the U.S. Air Force with the new B-21s and the Cold War-era B-52 Stratofortress bombers, with upgraded engines and other enhancements, as its bomber fleet.

To date, Northrop Grumman has started building five B-21s, and those aircraft are expected to start being fielded in the mid-2020s. Until then the B-1Bs will keep flying.