Lead-Based Paint Found in Half of all Inspected Schools 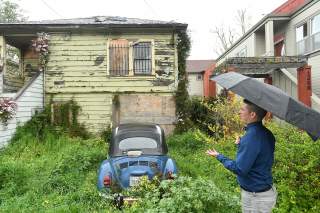 With all the emphasis that has been placed on making sure children are safe from the hazards of lead-based paint at home, similar efforts would seem just as important for America’s schools.

After all, outside of the home, young children spend the majority of their day – 6.8 hours a day – at school.

Yet a new federal report found that an estimated 15.2 million children in the U.S. go to schools in school districts that found lead-based paint. This is happening more than 40 years after the United States’ 1978 ban on the use of lead-based paint in housing.

For years, as a nursing professor and parent educator who specializes in treating children with elevated lead levels, I have worked to identify children with lead poisoning and to help parents make their homes lead-safe.

Lead, breathed in or ingested, can affect children’s brain development and result in reduced “intelligence quotient,” or IQ.

The report, released June 24 by the U.S. Government Accountability Office, highlighted how many school districts – 72% – are not even inspecting their buildings for lead-based paint hazards. The Government Accountability Office restricted its analysis to school districts that had at least one school built before 1978, and those that obtained drinking water from a public water system.

Among the 12% that do inspect for lead hazards, more than half found them. That raises questions about what amount could be found in the remaining 88% of schools that aren’t looking.

Lead was more frequently found in large school districts – 51% of the time versus 8% for other districts, according to the report. There could be a number of reasons for these results. These larger districts may have older school buildings, or they may be in larger cities that lack the money to keep schools in a good state of repair.

Specifically, 58% of school districts did not notify parents of their findings and 46% did not tell school board members, according to the report. Fifty-nine percent didn’t tell the media, the report states.

To make an impact on lead hazards in America’s schools, there needs to be transparency. As one who has worked directly with lead-poisoned children, I find it interesting how often there is an emphasis on making sure students have things like technology to make sure children learn. The same emphasis needs to be placed on making sure schools are free from hazards, such as those posed by lead-based paint, that threaten children’s ability to learn.