Less Than 20% of U.S. Air Force B-1 Lancer Bombers are Operational 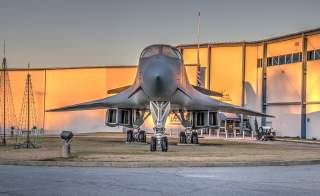 The U.S. Air Force is slacking when it comes to the B-1 Lancer fleet, with less than ten operational units out of a total number of 62.

The fast-moving, low-level bomber was once the pride of the USAF but now problems are beginning to manifest as the Air Force neglects them in favor of newer airframe and projects.

The newest B-1 in the fleet began flying the skies 31 years ago and the plane itself has been in service since 1985.

Originally it was outfitted to deliver a nuclear payload, but over time the B-1’s role within the Air Force has changed.

The B-1B was used to the point of exhaustion in Afghanistan, where high demand for close air support and a higher mission tempo kept the non-nuclear bomber overworked.

According to Popular Mechanics, the USAF has reassigned crews of non-flyable Lancers to other aircraft, and the remaining planes have been tasked with jobs such as long-range strike and maritime missions against enemy ships.