Lethal Force Will Help Prevent A War With Iran 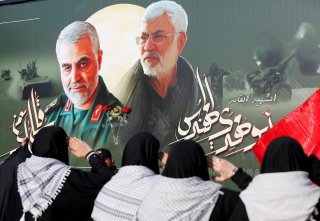 Since 2016, the United States has prosecuted a campaign of “ Maximum Pressure ” against Iran.  Using mostly economic levers , the campaign seeks to compel Iran to the negotiating table regarding its nuclear weapons program and curb its support to regional terrorist groups that threaten U.S. sovereignty and regional allies (lives and territory) and jeopardize American and global commerce (disrupting critical petrochemical shipping lanes).  In seeking to leverage all elements of national power, the "Maximum Pressure" campaign converges with the U.S. military's shift to a strategy focusing on Great Power Competition (GPC).
Itself a monumental shift from almost two decades of counterterrorism (CT) strategy, GPC contains an inherent assumption and imperative for the United States. First, GPC assumes that the United States considers itself not just a great power, but foremost among the Great Powers as a global purveyor of freedom and prosperity.  This assumption, while appearing almost too obvious to require articulation, is critical in how it relates to the resulting imperative:  As a great power, the United States must act great.  That is, there can be no "great power competition" unless great powers (i.e., the U.S.) act great.  Acting great means having the courage to lead, assert, and defend national sovereignty on the world stage.  By definition, GPC re-invigorates the concept and importance of nation-state sovereignty (the "Great Power" portion of GPC) while imploring the U.S. to discover ways to compete with nation-state adversaries at levels of conflict beneath open warfare (the "Competition" part of GPC).

Given these essentials of GPC, the salient lessons and lethal skills honed during a CT-focused strategy, and the persistent hostilities and internal dynamics emanating from Iran, a nation-state threat, specifically named in the National Defense Strategy (NDS). The time has never been more appropriate to leverage lethality in nation-state competition with Iran.  Besides being the most effective way to compete, smartly employing the lethal force will likely de-escalate (not escalate) nation-state competition with Iran, keeping it beneath open, state-on-state warfare.

To compete favorably with nation-states requires competitive advantages.  For all the talk in the NDS about militarily “ expanding the competition " with nation-state adversaries like Iran, the U.S. military holds few competitive advantages with its Iranian adversary.  Politics – which enables the Iranian regime to take relatively unconstrained military actions in the Middle East compared to constrained U.S. military actions- accounts for some of the Iranian advantages against the U.S.  But not all of it.

Iran’s asymmetric use of proxies across the Middle East has consistently out-maneuvered and out-flanked American partnered efforts in the region.  From Lebanon , to Iraq and Syria , and stretching south into Yemen , Iranian proxies and partners are consolidating their gains - many times at the expense and in spite of American efforts- while exerting unprecedented influence in the region.  Indeed, experts now speak of contiguous “ axes of resistance ” from Iran encroaching the northern and southern borders of Israel.  The sum of these dynamics across the Middle East makes one thing abundantly clear:  the U.S. military is at a decisive competitive disadvantage in this domain.

Despite (or perhaps because of) this military competitive disadvantage with Iran in the Middle East, nevertheless, the U.S. military can outcompete Iran by leveraging the one area where it owns a decisive competitive advantage: lethal force.  Because many who read the previous statement will immediately (and erroneously)  assume that advocating for lethal force is synonymous with support for military-induced regime-change and/or “Iran Hawk” calls for war , it is necessary to clearly define the context and parameters for leveraging lethal force to expand (and win) the competition against Iran.

Great Power Competition requires great powers to assert and defend their sovereignty in the face of threats.  In this context, the U.S. military can appropriately introduce precision lethal force only after clearly defining, for Iran, what it considers threats to its sovereignty and then clearly define the expected lethal consequences of violations to U.S. sovereignty.  Some have termed such behavior-defining strategies as establishing " red lines ."  In this context, targeted and precise lethal responses impose real costs on Iranian military targets (including personalities) but remain limited enough to avoid escalation to open warfare. U.S. military lethal targeting capabilities, developed, honed, and perfected during the GWOT against non-state actors, gives it the ability to reach out and lethally impact Iran in ways that the Iranian military apparatus cannot match.  This is the competitive advantage that can turn the tables in the Middle East and allow the United States to potentially alter the hostile behavior of a long-standing regional adversary.

Not only does introducing lethal force in the manner described above represent the best way for the U.S. military to transfer the relevant lessons gleaned from conducting CT into the GPC framework, but the internal dynamics within Iran, unique in its history since 1979.

Currently, the Iranian regime is beset with numerous internal existential crises that some claim threaten the regime not seen since 1979. Economic isolation and turmoil , created in part from the U.S. "maximum pressure" campaign using robust sanctions, have led to widespread protests (and corresponding regime repression) throughout Iran.  Unlike previous widespread protests like 2009's Green Movement, current protests include sectors of Iranian society that have historically been the backbone of regime support in Iran : namely the working class.  The regime’s embarrassing and tragic shootdown of its own civilian jet (and subsequent cover up ) are being exacerbated by current struggles with the emerging Coronavirus crisis, having discredited the regime further.

Far from galvanizing support for the regime, smart and targeted lethal action against military targets will potentially bolster anti-regime activity in Iran.   At worst, the prospect and follow-through of lethal force will alter the Iranian regime's decision-making and appetite for conflict escalation.  At best, lethal strikes that target and impose costs on the regime will further widen and expose fissures in the regime's ruling capacity, which might give opposition movements the time, space, and confidence to bring about meaningful change in their country and dislodge an incredibly unpopular ruling class.

Critics of the above proposed strategy will claim that such lethal force will escalate tensions with Iran and plunge the United States into another war in the Middle East.  Given the United States’ never-ending military conflicts in the Middle East, concern is valid.  Except that it isn’t.  It is possible to use lethal force to reduce tension by clearly and firmly signaling consequences for “red line” violations, while avoiding escalation.

Lethal force applied to the Syrian regime, after their use of chemical weapons, and against Iran in the precision strike that killed Qasem Soleimani bear this out.  In Syria, lethal force applied against regime military infrastructure did not lead to state on state confrontations, notable in a conflict where U.S. forces and Syrian regime forces delicately avoided confrontation.  In the short-term after the Solemanei strike, the Iranian regime appeared to actually advise its Shia proxies in Iraq against escalation while allegedly giving the United States early warning for a retaliatory strike that caused minimal damage to U.S. forces and infrastructure.   Targeted, precise, lethal force won't plunge the United States and Iran into war – but by clearly setting behavior expectations and consequences- it may prevent one.

Additionally, critics of introducing and using lethal force will point to similar “ whack-a-mole " strategies employed against terrorist groups during the GWOT and claim that such strikes are indecisive and will not work.  Except that the comparison is not valid.  Lethal force employed to re-establish sovereignty as part of Great Power Competition is not the same thing as lethal strikes against non-state actors.  Re-establishing sovereignty requires entities that understand and respect sovereignty.  Malign transnational actors do not respect sovereignty, and thus, lethal strikes alone are unlikely to modify their behavior.  Nation-states, on the other hand, depend on sovereignty and, unlike non-state actors, are confined to geographic boundaries with defined constituencies.  With discrete and fixed interests and territory at stake, lethal strikes that degrade nation-state power will likely have a much greater impact adjusting the risk calculus and behavior of nation-state adversaries.

Finally, critics of leveraging the lethal force competitive advantage against Iran will disagree that lethal force represents the best military competitive advantage and suggest other non-lethal domains, such as the emerging information domain, as better arenas to impose costs on the Iranian regime.  Except that nearly all recent evidence of U.S. non-lethal information activities in the Middle East have failed to reach desired outcomes.  Laying aside the obvious distinctions between Arab and Persian and Sunni and Shia, at the broadest level, Iran, as an Islamic country competing in a predominantly Islamic region, and commands significant advantages in the information domain.  Iranians instinctively and intrinsically understand the nuanced themes and messages surrounding sectarian divisions and perceptions of foreign, non-Muslim entities in the Middle East.  And, they can, more effectively, exploit them for military advantage.  America's failure to " win the hearts and minds ” of Arabs, Iranians taking credit for the defeat of ISIS , and, most recently, influencing the Iraqi government’s vote to oust American troops from the county serve as reminders of U.S. limitations and Iranian proficiency in non-lethal domains.

After the U.S.-strike that killed Iranian General Qasem Soleimani , many noted that the operation had “ re-established deterrence ” with Iran.  It re-established sovereignty concepts in tandem with a strategy shift to Great Power Competition.  GPC requires actions that define and defend U.S. sovereignty.  Lethal force is the only area where the U.S. military will outcompete Iran in efforts to defend and protect American sovereignty and interests in the Middle East.  It is also the surest way to apply and carry forward the most relevant lessons from the GWOT into the emerging GPC environment.

Unprecedented internal unrest and instability in Iran likely mean that the effects of U.S. lethal actions to re-establish sovereignty with Iran should be multiplied and augmented, increasing the chances that the Iranian regime modifies its behavior accordingly or face internal collapse.  Lethal force is neither a euphemism for regime change nor license to escalate conflict to open warfare.  Rather, in the age of Great Power Competition, it is the U.S. military's best resource to remind adversaries that being an American citizen comes with great power protection and those that threaten or cross "red lines" of American sovereignty or national interests can expect lethal consequences.

Scott J. Harr , U.S. Army, is a Special Forces officer with over three years of cumulative time serving in the Middle East.  He holds an undergraduate degree from the United States Military Academy at West Point in Arabic Language Studies, a Masters degree in Middle Eastern Affairs from Liberty University, and is currently a Ph.D. candidate in Foreign Policy at Liberty University.  Additionally, he is a distinguished graduate of the Command and General Staff College, Fort Leavenworth, KS.  He has contributed articles on national security and foreign policy topics to a wide range of journals and web-based venues seeking to facilitate dialogue with leading security professionals.